11 dead in Italy as European weather turns deadly: Record floods and snow in the South and record heat in the East 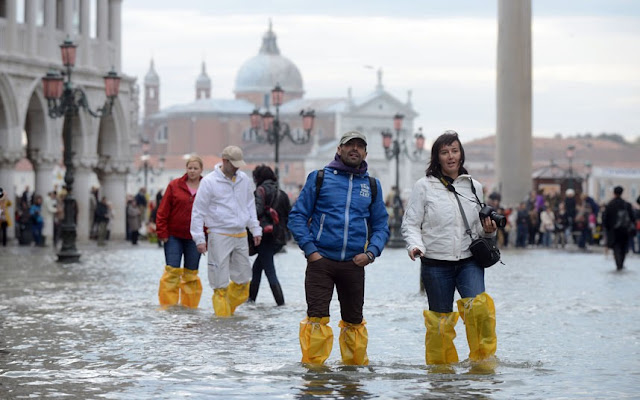 Violent storms battered Italy for a third consecutive day on Tuesday, killing at least 11 people, and flooding much of Venice.
The lagoon city's St Mark's Square remained under water for a second day while the adjacent St Mark's Basilica was inundated, its baptistery totally flooded and its mosaic floors covered by 90cm (2ft 11in) of water.
"The basilica has aged 20 years in just one day, and perhaps I am being overly optimistic about that," said Carlo Tesserin, the church's chief administrator.
"It is becoming ever more difficult for us and indeed could become impossible for us to repair the damage, especially in an age of climate change."
Italian media said it was the second time this century that the basilica had been flooded, and just the fifth time there had been such high water within the body of the cathedral in the structure's 1,000-year history.
Widespread damage was also reported in towns and cities in the north, south and centre of Italy. Many of the 11 deaths were caused by falling trees as winds as strong as 90mph whipped the country. One of the hardest hit regions was Liguria in the north-west.
The breakwater walls in the chic seaside resort of Rapallo were destroyed by pounding waves, letting in a surge of water that toppled dozens of luxury yachts and inflicted heavy damage on the port area. Local media said a yacht owned by the family of former prime minister Silvio Berlusconi was one of those badly damaged.
The nearby resort town of Portofino was cut off by a landslide while the video showed seawater pouring through the picturesque fishing village of Vernazza further to the south.
The weather was expected to improve late on Tuesday and on Wednesday "giving the country a truce", an official from the civil protection agency told Reuters.

Meanwhile, heavy snowfall across south-central France, with up to 40cm (16in) falling in some towns and villages, caused chaos on the roads and knocked out electricity to nearly 200,000 homes, authorities said on Tuesday.

Southern Europe's freak weather has seen the Mediterranean nation of Spain battered by a tornado, just 48 hours after the country was blanketed by heavy snowstorms.
More than 38,000 homes were left without power for a whole day after the tornado ravaged the island of Menorca yesterday.
More than 50 trees and hundreds of power lines were pulled down by the powerful storm, leaving thousands of residents without electricity.
Neighbouring principality Asturias' 25,000 properties also had their power knocked out by the tornado. A week-long spell of rain, snow and unseasonably low temperatures has been blamed on the arrival of a mass of polar air lingering over the Iberian Peninsula.

A tornado caused a great deal of damage in the German state of North Rhine-Westphalia on Wednesday.
Around the city of Viersen, just across the border of Venlo, multiple homes lost roofs and numerous trees were blown over, NOS reports.
One person was seriously hurt in Viersen and a firefighter was hit by lighting.
As far as is known, no one was killed. The tornado lasted almost 15 minutes.

Hungary's temperature rose to a record high on October 29 and the heat record was also broken for Budapest. The mercury hit 27.1 C. in the village of Kubekhaza in southern Hungary on Monday, the national weather service said. The previous record of 25.9 C. was measured in the village of Szerep in eastern Hungary in 1923.