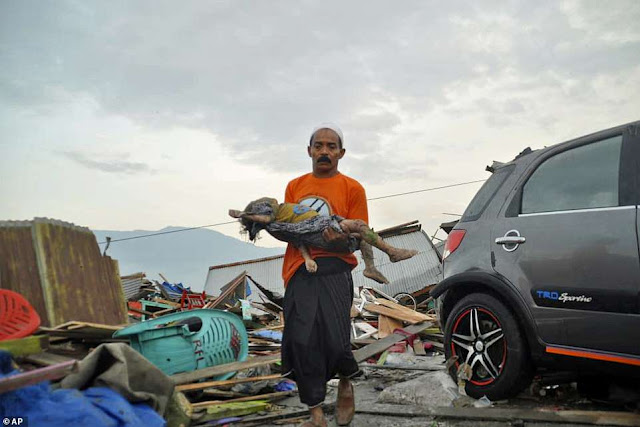 A man carries the body of a child who was killed in the tsunami. Photo AP

Indonesia's geophysics agency lifted a tsunami warning 34 minutes after it was first issued following a major earthquake that sent huge waves crashing into the northeastern coast of Sulawesi island, killing almost a thousand and leaving thousands more homeless.
Hundreds of people, around 1,000, had gathered for a festival on the beach in Palu on Friday when waves as high as six metres (18 feet) smashed onshore at dusk, sweeping most to their death.
The geophysics agency (BMKG) faced criticism on Saturday on social media, with many questioning if the tsunami warning was lifted too soon.
At least 832 people have been killed with many more still missing after the 7.5-magnitude earthquake and subsequent tsunami rocked the Indonesian island of Sulawesi on Friday, the country's disaster agency confirmed Sunday.
They added that the affected area is much larger than previously thought.
There are also fears the death toll could rise to the "thousands" as contact is restored with remote areas where communications were downed, Vice President Jusuf Kalla has said.
Rescue teams on Sunday were struggling to reach communities in affected parts of the island.
Dozens of people are thought to be trapped in the rubble of a hotel and shopping mall in the city of Palu.
The Red Cross estimates that more than 1.6 million people in total could have been affected by the disasters.
Thousands of buildings were destroyed by the earthquake, which was centered about 48 miles (77km) north of Palu, according to the United States Geological Survey.
"We have found corpses from the earthquake as well as bodies swept up by the tsunami," said Indonesia's disaster agency spokesman Sutopo Purwo Nugroho on Saturday.
The waves reached as high as six meters (18 feet), he added, saying some people were able to save themselves by climbing taller trees.
Preparations for a beach festival were being made in Palu when waves struck, houses had been swept away and families remain missing.
Indonesia's military dispatched cargo planes Saturday carrying medical supplies to affected areas, but rescue efforts were hampered after communications around Palu and a nearby fishing village, Donggala, which lies close to the earthquake's epicenter, had been downed.
Condolences to the families of the victims of the earthquake and tsunami in Indonesia was expressed by the Minister of Foreign Affairs of Ukraine Pavlo Klimkin.
He wrote about this in his Twitter.
Also, the diplomat wished recovery to the victims of the disaster. "My deepest condolences to the families and friends who lost their loved ones in the devastating earthquake and tsunami on the Indonesian island of Sulawesi.