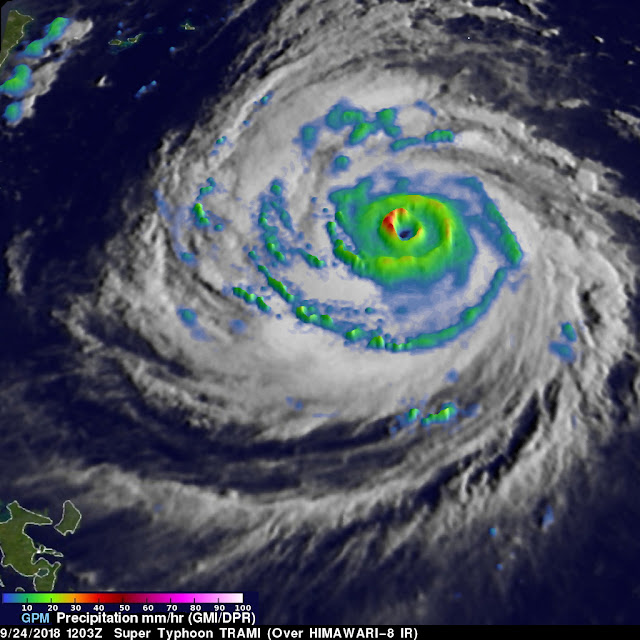 The GPM core satellite flew over Trami on Sept. 24, 2018, and found extremely heavy rainfall in the super typhoon’s well defined circular eye. The rain was also falling at a rate of over 120 mm (4.7 inches) per hour within intense storms in a strong feeder band well southwest of Trami’s eye. Credit: NASA/JAXA, Hal Pierce

As Japan is still recovering from a record-breaking summer of disasters the next "Super Typhoon" is taking aim at the land of the rising sun.
The powerful typhoon is slowly meandering northwards to the Ryukyu Islands of Japan.
Typhoon Trami will remain over the open ocean in an ideal environment through at least Thursday, the warm waters of the Pacific acting like rocket fuel for the typhoon.
According to AccuWeather.com Trami will remain over the Pacific allowing the storm to remain a dangerous and powerful typhoon.
Due to the slow movement of the storm, communities still have time to prepare for possible impacts or evacuations from Trami, which could produce life-threatening conditions hundreds of miles from its centre.
An area of high pressure stationed east of Japan will push Trami slowly northwestward through Friday.
Trami will then accelerate toward Japan’s Ryukyu Islands from Friday night into Saturday.
It has been a miserable summer for Japan, authorities evacuated 36,000 from powerful Typhoon Jongdari as it smashed into the South East of the island only weeks after more than 300 died along with  40,000 hospitalised from floods a heatwave and landslides.
In August Typhoon Shanshan smashed into Tokyo dumping 350 millimetres (13.7 inches) of rain over the greater Tokyo region over the 24 hours when
Japan was still recovering from one year's rainfall which fell in just over a week at the end of July.
In September, Japanese media reported, a powerful earthquake paralysed the northern island of Hokkaido on triggering landslides and knocking out power to its 5.3 million residents.
Public broadcaster NHK reported the first confirmed fatality and said 120 people had also been injured after the 6.7-magnitude quake.
Aerial footage showed dozens of landslides exposing barren hillsides near the town of Atsuma in southern Hokkaido, with mounds of reddish earth and fallen trees piled up at the edge of green fields.