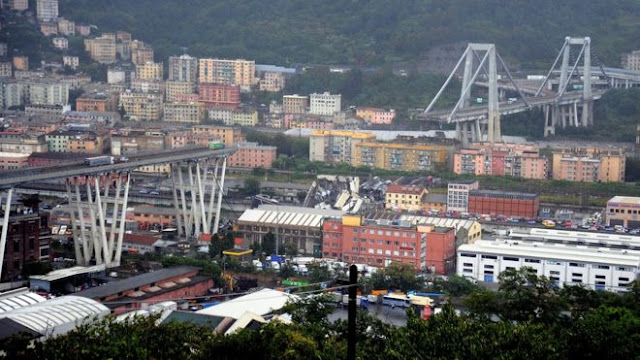 At least 22 people have been killed including a baby and dozens more are feared dead after a huge 260ft section of a highway bridge collapsed during a fierce storm in Genoa, Italy.
Cars fell 300ft along with tonnes of twisted steel and concrete debris into a river, railroad tracks and an industrial zone below when the Morandi bridge gave way at 11.30am local time.
The head of the local ambulance service said there were 'dozens of dead' in what the transport minister called 'an immense tragedy.'
One witness described the carnage as an 'apocalyptic' while rescuers are fearful damaged gas lines could explode. 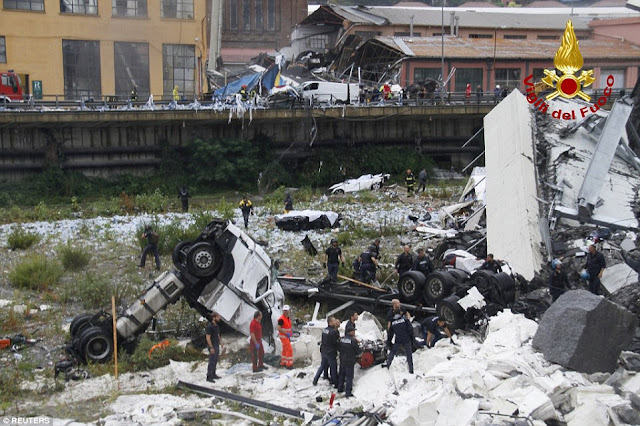 Reuters
Incredibly, two people have been pulled alive from cars found in the mangled ruins of the bridge.
The raised highway in the Italian city of Genoa collapsed Tuesday, leaving a huge chunk of the structure missing as witnesses say vehicles may have also plummeted when the roadway crumbled.
A witness tweeted he feared there may be victims and a reporter for Italian news agency ANSA, Claudio Accogli, also said there may have been many vehicles on the highway when both roadways of the A10 motorway crumbled.
A rescue mission was underway, though Italian officials didn't immediately confirm any casualties. Authorities suspected structural weakness was the cause of the collapse, ANSA reported.
Images posted by state police and witnesses showed a huge section of the bridge missing.
Parts of the structure also landed on the rooftops of nearby buildings.