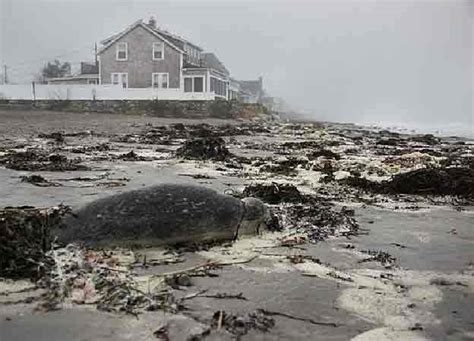 Photo seacoastonline.com
Marine mammal experts are at a loss to explain why a large number of harbour seals have turned up dead on beaches in southern Maine this summer [2018].
The most recent cluster of deaths was reported [Mon 13 Aug 2018] when the carcasses of 11 harbour seals, mostly pups, were discovered on Bayview and Kinney Shores beaches in Saco.
Those beaches are situated between Ocean Park and Ferry Beach State Park.
In the past 2 days, more than 30 dead harbour seals have washed ashore on southern Maine beaches, including Wells Beach and Ogunquit Beach, said Lynda Doughty, executive director of Marine Mammals of Maine, which investigated the Saco seal deaths.
Doughty said her Harpswell-based nonprofit has turned to the National Oceanic and Atmospheric Administration (NOAA) to help determine the cause of the seal deaths in Maine.
NOAA is analyzing tissue samples taken from the dead animals.
Researchers are in the process of determining how many dead seals have washed ashore in southern Maine this summer [2018].
In Saco, the seal carcasses were in various stages of decomposition and their ages varied widely, although most of the animals were pups, Doughty said.
"None were really fresh carcasses," she said, noting that will make it more difficult to determine when the animals died.
The Saco Police Department took the 1st report of the dead seals around 7:30 a.m. [Mon 13 Aug 2018].
Lifeguards who arrived at the Bay View and Kinney Shores beaches a short time later found 11 dead seals, said Ryan Sommer, director of Saco Parks and Recreation.
The city called the Marine Mammals of Maine, and Sommer said the nonprofit sent a volunteer to Saco to examine, measure and photograph the seals.
"It was a high number of them to look at," Sommer said.
"It's a bigger number than they anticipated."
After the seals were examined, the city's public works department removed the carcasses from the beach to dispose of them, Sommer said.
"That is a high concentration of seals in a small area," said Tony Lacasse, a spokesman for the New England Aquarium in Boston, after being told of the seals that washed ashore in Saco.
"It's obviously very unusual."
Historically, about 30 per cent of all harbour seal pups born in any given year die that year, Lacasse said.
He said the die-off seen in Saco reminded him of a situation that took place on a beach in Rye, New Hampshire, late in September 2011.
The aquarium sent a veterinarian to Rye and found the carcasses of 6 harbour seals.
There was a lunar high tide with big surf when the seals washed ashore.
In December 2011, The Associated Press reported that 162 seals had been found dead since [1 Sep 2011] on the coast from northern Massachusetts to Maine.
The die-off that year [2011] was particularly intense in September and October when deaths were about 3 to 4 times the normal number.
Tests conducted on 5 animals showed they suffered from pneumonia caused by a strain of avian influenza - H3N8 - that can be transmitted to seals through contact with seabird guano.
Although marine mammal researchers are just beginning their investigation into the recent harbour seal deaths, Lacasse said the cause of the current die-off could be connected to another flu outbreak. Another possibility is a shortage of the fish, shellfish and crustaceans that harbour seals feed on. harbour seal pups are typically born in May.
Their mothers nurse them for about a month, but by the time June and July arrive, the seals are "on their own" and must forage for food, Lacasse said.
Harbor seal pups can swim at birth and can dive for up to 2 minutes when they are only 2 or 3 days old, according to NOAA.
Mother harbour seals raise their pups in nurseries that help protect the pups from predators.
Several whale carcasses have come ashore this summer as well, but Lacasse said he is confident that their deaths are not connected to the seal die-off.
Last month [Jul 2018], the carcass of a badly decomposed adult minke whale washed up on Old Orchard Beach, about a mile south of the Old Orchard Beach Pier.
An excavator was used to remove the 5500-Lb [approx. 2500 kg] whale carcass from the beach. Another dead minke whale washed ashore last month [July 2018] in Cape Neddick.
That whale had been dead for several weeks.
On [7 Jul 2018], Marine Mammals of Maine responded to the death of a juvenile minke whale that washed ashore at Kittery Point.
Lacasse doubts the avian flu is what caused the whales to die.
"I don't think so.
That would be a big jump (for the virus) to make," he said.