A mass mortality never seen before: Thousands of fish sea turtles, manatees and other marine life dying from massive algae bloom in Florida 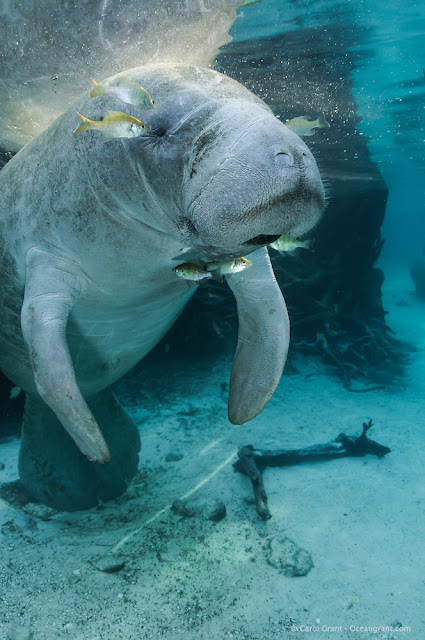 Photo oceangrantimages.com
If you're wondering whether the red tide has made its way to Manatee County yet, the simple answer is yes.
It just depends on where you are looking.
At least, that's the way conditions were as of Sunday afternoon.
By Sunday, reports of dozens of dead fish, a foul smell in the air and terrible coughing fits reached as far north as Bradenton Beach.
But in Anna Maria, near the northern tip of the island, there were no obvious signs of red tide.
The algae bloom, known as Karenia brevis, has wreaked havoc along Florida's southwest coast, seemingly creeping its way farther north with every passing day.
By late last week, it had reached Sarasota County, leaving Siesta Key with brown water and thousands of dead fish lining the shore.
Even farther to the south, red tide has been blamed for the deaths of thousands of fish, as well as sea turtles, manatees and other marine life.
While northern Anna Maria Island seemed safe Sunday, the murky brown water was a signal that full-blown red tide may soon arrive.
That's what Allison Rodriguez noticed when she got to the beach.
Having travelled from Georgia with her mother, husband and two children, Rodriguez said she was looking forward to the clear waters that southwest Florida beaches are known for.
But that was not the case Sunday.
"We really didn't know where to go," Rodriguez said looking out at the water.
"Hopefully we will find clearer water if we go a bit north."
The microscopic organism exists offshore throughout the year. It only becomes a problem when the algae blooms at high concentrations, said Robert Weisberg, a professor of physical oceanography at the University of South Florida.

Meanwhile, further South hundreds of sea turtles have washed up on Southwest Florida beaches this year in a mass mortality event that researchers say will impact the recovery of the protected species.Seventeen have been recovered off Sanibel and Captiva islands near Fort Myers in the past week. "Our average for the entire year is usually around 30 or 35, but we've had 53 in June and July alone," said Kelly Sloan, a sea turtle researcher at the Sanibel-Captiva Conservation Foundation on Sanibel. Sloan said foundation has picked up 91 sea turtles on the islands since a red tide bloom started in October."Most of them have been mature adults, and only one in 1,000 make it to adulthood," Sloan said."It takes a loggerhead 25 to 30 years to mature, so that really does have a significant impact on their recovery."More than 100 turtles have been plucked from Sarasota County waters, and another 66 have been found in Collier."It's really disheartening to see this mass mortality," Sloan said."This is the 10th month of the red tide event, and it's the longest continued bloom since 2006." Researchers don't know for sure if red tide killed or injured the turtles, but Sloan said she is "very confident" that the turtles were claimed by the algae bloom because many exhibited neurological symptoms associated with red tide.