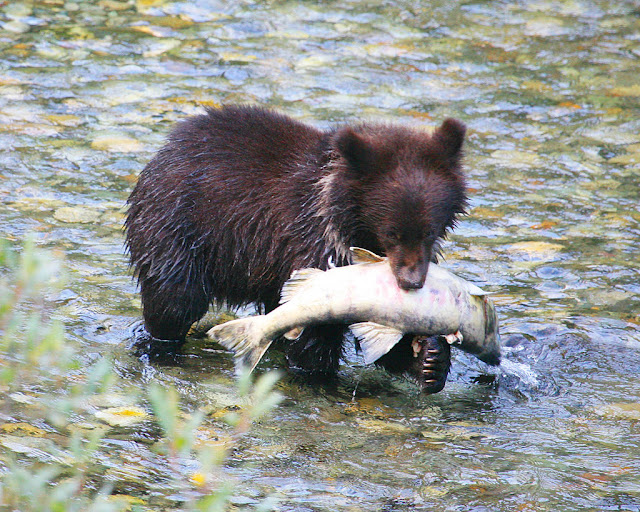 Photo credit Wikipedia
This morning in my in-tray arrived the latest update from our intrepid explorer Bill up there in Alaska and his recent results, as he keeps an eye on radiation levels in the fish up there.
Bill, who is deeply respected and trusted by thousands of readers on The Big Wobble has released his latest findings exclusively to The Big Wobble and it's not good.
All the fish he has monitored on his latest update have shown increased radiation.

Greetings Gary & Readers of The Big Wobble,
Just a quick update on the seafood radiation issue in Alaska. Today I checked red (Sockeye) salmon and halibut. The halibut is showing higher levels of radiation than the red salmon. But at this time, the red salmon, which should be in our rivers in abundance, are so far, very low in their return numbers. Are they just late or are they dead?
It has been my experience that the red salmon have read lower for radiation than the pinks (Humpback/Humpy), kings (Chinook), silvers (Coho) and Chum salmon. I believe this is due to the fact the red salmon are a vegetarian salmon.
The radiation level for the red salmon and halibut are higher than in previous years. I will do my best to keep you posted throughout the summer and I encourage everyone to NOT eat seafood.
Here is an easy way to remember the five types of Salmon found in Alaska. You learn them by looking at your hand!
(As found on www.experienceketchikan.com)
That’s it from Alaska for now!
Bill.


Bill started measuring the radiation level of fish two years after the Fukushima disaster in 2011, he was told that the most common monitor being used in Japan that people living near the Fukushima area use are the Radex RD 1503. This meter is made in Moscow, Russia, by Quarta-Rad Limited.
Bill's initial findings were quite shocking.
Bill explains, "once obtaining the meter, I started taking readings of people’s salmon."
By the second year after the Fukushima incident, all the salmon he scanned read radioactive.
He had seen a steady increase in radiation levels of salmon through last year with not one salmon failing to register some contamination.

Last year he checked halibut which came from local waters.
They, too, registered radiation.
Since halibut are bottom feeders, Bill thought this might explain why, on his walks along the beach and seeing at various times dead crab, the occasional sea otter, and a couple of times more jellyfish than he could count, not to mention numerous birds.
He goes on.
"In my attempts to find out what constitutes safe levels of radiation, official agencies do not seem to be able to agree on just what those safety levels are."
"I will say that I have found an increase of over 27% of radiation levels since around 2012."
"So whether the data I have observed is minimal or should be alarming, it is definitely building every year."
"Last year, a woman I know, who had just been released from the hospital after receiving numerous doses of radiation had me scan her body."
"It read lower than the salmon taken out of her freezer."
"I asked a commercial fisherman whom I respect what he had heard about radiation levels and salmon."
" He told me they have been told there is no radiation problem in salmon and they are healthy."
"I told him that I was finding constant radiation and I would come over and scan his salmon in his freezer if he wanted me to."
"He was visually shaken."
"Many of us have chosen to no longer consume for ourselves or our dogs any seafood off the Pacific Coast."
"From what I understand, radiation can build up in one’s system."

Bill has his own page here on The Big Wobble