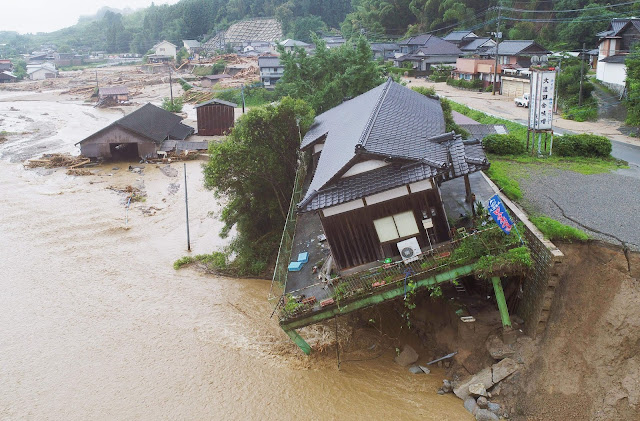 Photo newindianexpress.com
The toll in deadly rainfall that has devastated parts of Japan with flooding and landslides rose Tuesday to 122, as hopes faded that further survivors could be found.
Dozens of people are still missing, and with the rains finally letting up on Monday, rescue workers were able to reach previously cut-off places where authorities fear more bodies may be trapped beneath debris.
With the toll mounting, Prime Minister Shinzo Abe cancelled a four-country foreign trip, and he was expected to visit the disaster-hit region later this week.
Over 70,000 emergency workers have been deployed to dig through flood waters and the aftermath of landslides that have transformed the landscape in parts of central and western Japan.
But four days after the worst of the rains began, hope was starting to fade that the search would find new survivors.
"I have asked my family to prepare for the worst," said Kosuke Kiyohara, 38, as he waited for word of his sister and her two young sons in the town of Kumano.
"I can't reach her phone," he told AFP on Monday, sitting across from a house that had been ripped apart and tossed on its side by a huge landslide.
Rescue workers acknowledged the odds of finding people alive were getting longer.
"It's possible that survivors will be found, but as the days pass the likelihood becomes slimmer," a soldier nearby told AFP.
At the end of last week, rivers engorged by more than a metre (three feet) of rain burst their banks, engulfing entire villages and forcing people onto rooftops to await evacuation by helicopter.
Hillsides gave way under the weight of water, with deadly landslides crushing wooden houses and erasing roads.
Government spokesman Yoshihide Suga said 73,000 police, firemen and troops were taking part in the rescue effort, with 700 helicopters deployed to help.
In Kumano, soldiers and other emergency workers were using diggers to clear crushed cars and mangled homes and chainsaws to cut up tree trunks.
But they were moving carefully, looking as they went for survivors or the remains of those killed in the disaster.
In one part of Kumano, the nose of a white car was just visible underneath the top floor of a home that had been torn from the rest of the building and swept down a hillside.
Water was still flowing from the surrounding hillsides around the feet of shell-shocked residents, some of whom wept as they saw their damaged district.
In neighbouring Okayama prefecture, rescue workers flew in helicopters over areas that are still submerged and otherwise unreachable, looking for signs of life.
"As far as we could see from the helicopter, no-one is now waving for help," a rescue worker from Kurashiki city told AFP.
Local government officials said pumping trucks were being deployed to help restore access to some of the worst-hit areas, and on Monday flood water was finally starting to recede as the rains stopped. Even as the rains let up, authorities warned the downpours had loosened earth on hillsides and mountain slopes creating new risks.
"We urge residents to remain cautious about possible landslides," a weather agency official told AFP. And with many people stuck in modestly equipped shelters with few possessions, or living in damaged homes with no running water or electricity, the rising temperatures posed a new problem, authorities said.
At one point around five million people were told to evacuate, but the orders are not mandatory and many people remained at home, becoming trapped by rapidly rising water or sudden landslides. Naoaki Ogawa, 68, was still at home with his wife, daughter and grandson on Friday night, when they saw a wave of mud carrying trees and cars with it tumble down the hill above and engulf the neighbouring house.
They tried to flee by car but were trapped when a second wave swept down just in front of them, swallowing three cars.
They were rescued hours later and returned to the town on Monday, where Mr Ogawa found his telephone, filled with calls from concerned relatives and friends.
"I forgot to bring it with me," he said. "So many people called. I want to tell them that I am okay. I am well."