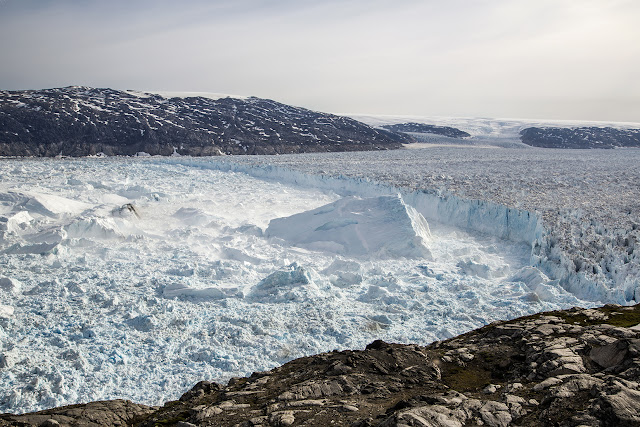 Photo credit carbonbrief.org
All was quiet on June 22 as Canadian husband-and-wife scientists David and Denise Holland settled in for the night off Greenland's Helheim Glacier.
The glacier researchers from New York University had spent four nights on the south side of Helheim but had just set up camp on the north side.
Denise had positioned her video camera - just in case - when she heard a noise that seemed to carry on "for an extended period of time."
That noise was a major breakup of the glacier that lasted more than 30 minutes.
Massive pieces of ice half a kilometre high broke off.
The water broiled as the new icebergs rolled and crashed.
Then the larger chunk of ice, estimated to be half the size of New York's Manhattan Island, began its journey to the sea.
In all, five to eight billion tons of ice was lost.
It is one of the biggest glacier calving events captured on video.
"It's a very loud booming sound that echoes across the fjord from one side to the other as different pieces of ice start to break off.
It's just this incredible loud sound," Denise Holland says.
"It's like a billion ice cubes at once," David Holland says.
"It's that kind of cracking sound."
It's events like this - considered a significant glacier loss - that deeply concern glaciologists and climatologists about the consequences to global sea levels.
This video may assist scientists in making predictions.
"I was impressed that they captured the event so well and that it had a lot of features it and complexity to it," says Ted Scambos, the senior research scientist with the U.S. National Snow and Ice Data Center.
"These things are important because, step-by-step, that's how we lose an ice sheet and raise sea level. So understanding these processes in detail is key in getting these models improved."
On average, Greenland loses 200 to 250 billion tons of ice a year.
That's a sharp rise from the 1990s when it lost roughly 50 billion tons a year.
It is responsible for contributing 0.6 to 0.7 millimetres of sea level rise of a total 3.5 millimetres annually.
Scientists are concerned that continued large-scale ice loss like this - as well as increased melting on Greenland and Antarctica - will cause a dramatic rise in sea levels.
Since 1970, Earth's temperature has risen by about 0.17 C a decade, with two-thirds of the warming occurring since 1975, which is attributed to an increase of carbon dioxide in the atmosphere.
This trend raises sea levels through factors such as melt runoff, glacier calving and the thermal expansion of the oceans.
When it comes to glacier calving, it's important to note that not all the ice starts off in the water. When it is added, it raises the sea levels.
"It's the same as taking an ice cube and putting it in a glass of water; the level in the glass goes up when you add ice," David Holland says.
The Hollands, who are from Newfoundland, are researching events like this to better understand how sea levels will change.
Next on tap for David Holland is the Thwaites Glacier in West Antarctica, where he will head in 2019.
It is more than 20 times wider than Helheim and flowing just as fast.
"It is the most important glacier on Earth to study sea level.
From space we can see that it's rapidly falling apart," he says.
"When it falls apart, it takes out a chunk of Antarctica, and then it's a significant sea level change," Scambos said scientists are keeping a very careful eye on West Antarctica.
"We refer to Thwaites as the wild card in terms of sea level rise," Scambos says.
"Because it is difficult to predict how fast things will unfold there ... But right now it's already out of balance by a large balance, more than Helheim."
The concern is that further changes can lead to "a radical increase" in how fast and wide Thwaites flows, and how that will unfold in the next century.
As for the Hollands, they're concerned for the future of glaciers and sea level rise, but they're happy they were able to capture such an important event.
"You never know when or what time something will happen," Denise says.