Terrifying scenes and endless crying as families screamed to be rescued: 175,000 homeless as floods devastate Somalia after crippling drought 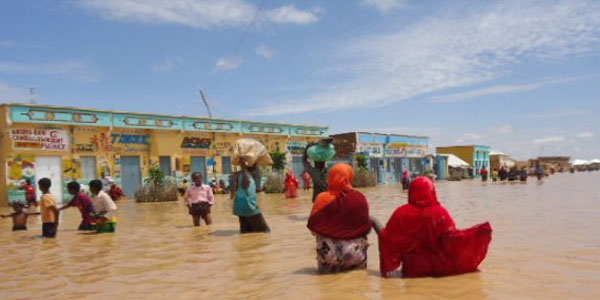 Photo newsone.tv
Somali families displaced by drought and near-famine conditions last year are now on the move again, with catastrophic flash flooding forcing nearly 175,000 people out of their homes, leaving them more vulnerable to malnutrition and diseases such as Acute Watery Diarrhea (AWD) and cholera.
Somalia's two major rivers are affected, with the Shabelle River rising at an unprecedented rate of around thirteen feet in less than a week during April-427,000 people are affected in Somalia alone.
A week after the rains began, they show no sign of letting up.
Save the Children's Jalafay Isak is working with the agency's emergency response team in Belet Weyne, the worst affected town in Hirshabelle state, where the Shebelle River overflowed its banks on Friday.
Over the weekend, there were terrifying scenes in the town, with families desperately seeking safety. "All night you could hear endless crying as families called to be rescued.
They were stranded in their houses with children placed on cabinets or the tallest surface they could find, fearing all night they'd be swept away as the river ran through their houses,"Isak said.
"They tried to evacuate for higher ground but the means of escape involved wading through water up to chest height and it was too dangerous."
About 122,580 people fled their homes as the river destroyed homes, farmland and crops in and around Belet Weyne.
Some of the affected were already displaced and living in low-lying displacement camps since 2016's devastating drought and food crisis.
Save the Children has distributed 12,000 sandbags this week and is providing clean and safe drinking water to 7,000 households.
The aid agency is also constructing 90 emergency latrines to address a lack of sanitation facilities and to prevent disease outbreaks in the area.
"However, this is not enough.
More support is needed.
We must work together and support the government to ensure we save lives and avoid further catastrophe," Isak added.
Motorboats are required in order to reach people in isolated locations who are in need of drinking water, shelter, food, latrines, mosquito nets and health services, and the floods are likely to take weeks to recede.
The Somali president is appealing for urgent assistance and the African Union has deployed troops to respond but many areas remain cut off.
The families affected were already suffering high malnutrition rates because of a two-year drought, which has devastated crops and killed livestock.
The 'Gu rains' have been prayed for by communities affected by four consecutive failed rains, but climate change, desertification and deforestation mean floods can be as disastrous as drought.
Some farmers have now lost their cash crops, which were almost ready for harvesting.
Rudimentary sewage systems have been washed away, along with houses, livestock, and household items.
In some cases, schools have been flooded and are no longer in use, and there is a high risk of a cholera outbreak.
With heavy rainfall in the Ethiopian Highlands forecast to continue, the Shebelle River looks set to continue wreaking havoc from its source and en route to Mogadishu.
Many regions in the Horn of Africa that were affected by the recent drought are now experiencing flash flooding, including in Kenya, with casualties reportedly exceeding 100 people.
The flooding is compounding an already fragile humanitarian situation with an estimated 5.4 million people in need of assistance in Somalia, 2.7 million of whom require urgent life-saving assistance. Somalia's Humanitarian Response Plan is only 18 percent funded, which is insufficient to support on-going operations to stave off famine as well as a flood response.