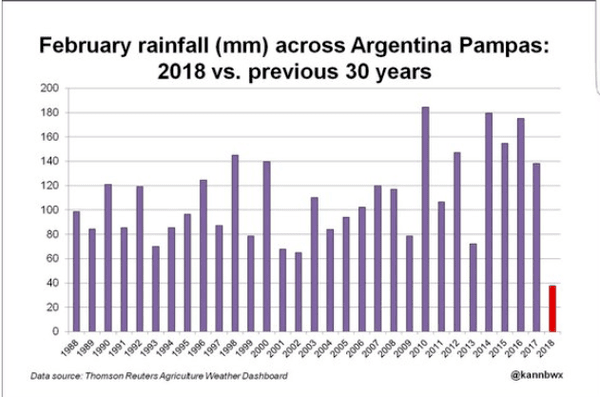 Graph credit gatewaytosouthamerica-newsblog.com
Argentina is the latest land to suffer drought horror as farmers are faced with slaughtering 1 million head of cattle in the coming year after ranchers are faced with the worst drought in decades have decided to slaughter females rather than grow their herds, analysts said.
According to Reuters, a wave of hot, dry weather since November has cut 40 percent off overall grains production in the world’s No. 3 corn and soy exporter and will knock off an estimated 0.7 percent from Argentina’s gross domestic product this year.
Slaughtering more female cows than expected will have long-term repercussions on the meat-loving nation’s herd at a time it was hoping to boost sales abroad after falling out of the top 10 beef exporting nations under the previous government.
“The next five or six months will be critical.”
Pastures have been depleted in one of Argentina’s main cattle producing areas in Chacabuco, in the north of Buenos Aires province, according to Guillermo Voisin, the president of the area’s rural society.
In continued "climate instability" 60,000 people were affected by deadly floods in the north, at the same time at least 600,000 hectares destroyed by fire in the east in February