Tiny Beetle Devastating Forests In Worst Outbreak Ever! 100,000 trees falling across the US every DAY and a billion dead in Colorado alone 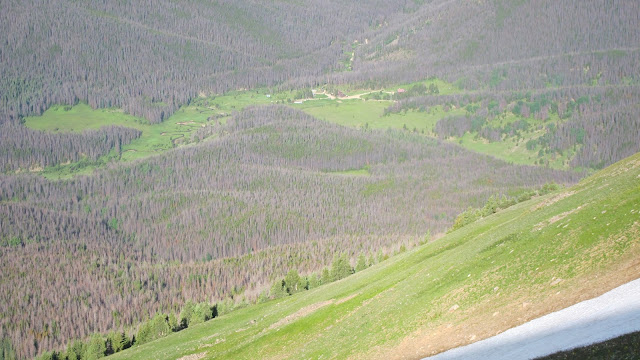 It's a worrying situation with almost 50 million falling every year across the US.
As California suffered the biggest wildfire in its history last year a new report claimed 30 million trees died in the last 13 months bringing the total to a staggering 129 million since 2014.
In Colorada, it's worse nearly one in every 14 standing trees is dead with an astonishing estimated 834 million dead trees.
Despite being smaller than a grain of rice, mountain pine beetles are causing big problems for pine forests across North America.
Bark beetle colonies feed and reproduce on the inner bark of ponderosa and limber pines, wreaking deadly havoc on the tree's ability to circulate nutrients and absorb water.
Due to changes in climate and other factors, the recent outbreak of these destructive insects has reached proportions never before seen in recorded history.
Alarming estimates from the U.S. Forest Service state that 100,000 beetle-infested trees fall daily across the United States.

To combat this epidemic, Professor Diana Six has made it her mission to crack the genetic code of the pine tree. She hopes that studying the relationship between the mountain pine beetle and the trees they kill will provide us with valuable insight into the future of our forests. In this short film made at the International Wildlife Film Festival Filmmaker Labs, Professor Six walks among the trees and shares her thoughts on why humans can do more to counteract the effects of climate change.