March madness begins in India: Temperatures of 42 deg C (108 deg F) resulting in people fainting and birds falling out of the sky 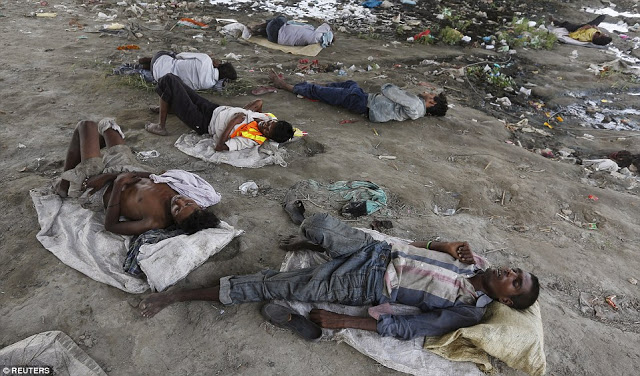 Photo Daily Mail
Every year thousands of people die from the heat in India, Pakistan and Bangladesh with the heatwaves beginning in March.
Surat became the second hottest city of Gujarat on March 26 when the mercury soared to 41.8 degrees Celsius.
The prevailing heatwave conditions led mercury to rise by 6.8 degrees Celsius from March 24 to 25. Meanwhile, the Surat Municipal Corporation has issued heatwave warning for Tuesday and Wednesday.
Constant 40 degrees Celsius temperature along with 21 percent humidity in the city has forced people to stay indoors in the past couple of days.
In the last two days, the number of cases of dehydration, mild fever with stomach ache and fainting has increased by 15 percent.
The New Civil Hospital (NCH) sources said as, against 12 such cases per day on normal days, their number has gone up to 20 in the past two days. SMC health officials said they have issued an advisory to all 40-odd health centres and SMIMER and other hospitals to remain vigilant.
SMC chief medical officer Dr Aashish Naik said, "We have not received any alarming heat-related cases till now, but are vigilant.
People should not venture out in the afternoon hours unless it is absolutely necessary."
A volunteer of a non-governmental organization Prayas Darshan Desai said, "The heat is taking its toll on young birds that fly out of the nests for the first time.
There has been a spurt in cases of birds falling off during flights in the last 48 hours."
Normally 45 cases of dehydrated birds falling off during flights were reported until Sunday, but the number has gone up over 60 in a day in the past two days.
Since 2015, Surat has been experiencing temperature above 40 degrees Celsius in the month of March.
Around 42 degrees Celsius temperature was recorded in 2015 March, 41 degrees Celsius in 2016 March, 41.4 degrees Celsius in 2017 March and 41.8 degrees Celsius in 2018 March.