50,000 affected with145 people still missing trapped in buildings Taiwan after magnitude 6.4 earthquake and swarm of after-shocks rock the island 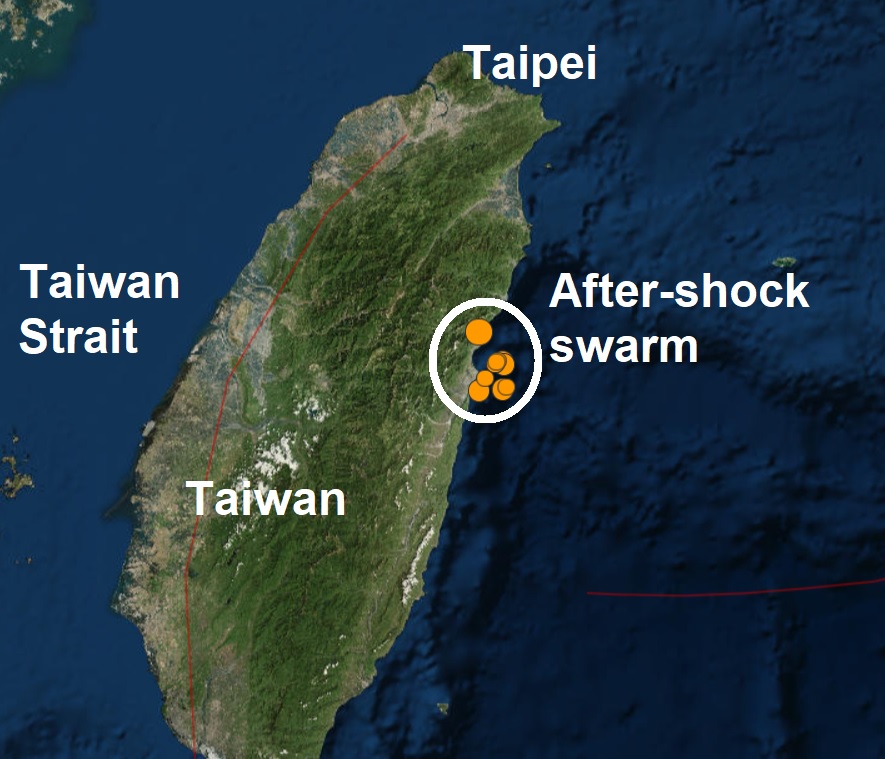 USGS
Rescuers combed through the rubble of collapsed buildings on Wednesday, some using their hands as they searched for about 145 people missing after a magnitude 6.4 earthquake struck near the popular Taiwanese tourist city of Hualien overnight.
At least four people were killed and 225 injured in the quake that hit near the coastal city just before midnight (1600 GMT) on Tuesday, officials said.
The latest figures from government data indicated 145 people were missing.
Many of those were believed to be still trapped inside buildings, including a military hospital, after the quake hit about 22 km (14 miles) northeast of Hualien on Taiwan's east coast.
Aftershocks with a magnitude of at least 5.0 could rock the island in the next two weeks, the government said. 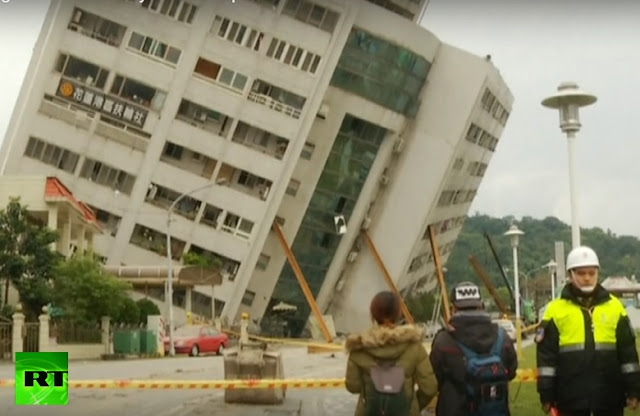 RT
Japanese, Czech and mainland Chinese nationals were among the injured.
Residents waited and watched anxiously as emergency workers dressed in fluorescent orange and red suits and wearing helmets searched for residents trapped in apartment blocks.
Hualien is home to about 100,000 people.
Its streets were buckled by the force of the quake, with around 40,000 homes left without water and around 1,900 without power.
Emergency workers surrounded a damaged residential building in the area.
Windows had collapsed and the building was wedged into the ground at a 40-degree angle.
Rescuers worked their way around and through the building while residents looked on from behind cordoned-off roads.
Others spoke of the panic when the earthquake struck.
A Reuters video showed large cracks in the road, while police and emergency services tried to help anxious people roaming the streets.
President Tsai Ing-wen went to the scene of the quake early on Wednesday to help direct rescue operations.
"The president has asked the cabinet and related ministries to immediately launch the 'disaster mechanism' and to work at the fastest rate on disaster relief work," Tsai's office said in a statement. Taiwan Semiconductor Manufacturing Co, the world's largest contract chipmaker and major Apple supplier, said initial assessments indicated no impact from the earthquake.
Taiwan, a self-ruled island that China considers part of its territory, lies near the junction of two tectonic plates and is prone to earthquakes.
An earthquake with a magnitude of 6.1 struck nearby on Sunday.
More than 100 were killed in a quake in southern Taiwan in 2016, and some Taiwanese remain scarred by a 7.6 magnitude quake that was felt across the island and killed more than 2,000 people in 1999.