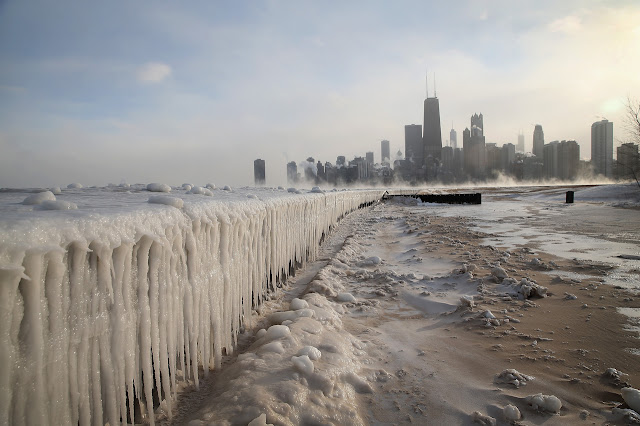 Photo thebookoftravel.com
As is often the case, there's good and bad news when it comes to the weather in Chicago.
First, the bad news: Chicago tied a record Saturday for its nearly two-week-long cold snap, meteorologists said.
The good news is the weather is expected to start warming up dramatically on Sunday, putting an end to the longest cold snap in more than 80 years.
Charles Mott, a meteorologist with the National Weather Service in Chicago, early on Saturday said it was unlikely the temperature Saturday would get above 20, which would tie a record of 12 days of temperatures that haven't gotten out of the teens.
Many days the thermometer has registered only single digits and even below zero.
The high Saturday at O'Hare was expected to be no more than 14 degrees.
Getting above 20? "It's not going to happen," Mott said.
"It would be nice, I would love to be wrong, but ... for that to happen, the forecasters would have to miss big.
They usually don't miss that big," he said.
Christmas Day was the last time the mercury rose above 20 degrees, according to the weather service. By staying so cold, Chicago tied the current record of 12 days in a row of temperatures below 20 degrees, which has happened only twice before since records have been kept, in 1936 and 1895.
On Saturday, the temperature was expected to be highest sometime between 2 and 3 p.m., Mott said, as it is a day with more sun than clouds.
A check with the National Weather Service at 4 p.m. confirmed it had not warmed to more than 20 degrees to that point.
It's not all bad news, though.
It is expected to warm up for a few days, beginning Sunday.
Mott said he started work at 6 a.m., and it was 8 below when he got to work Saturday.
On Sunday, even in the dark of early morning, it should already be warmer than it has been in the past 12 days, he said.
It could already be 14 degrees by 6 a.m. Sunday, he said.
"If it's minus 8 when I walk in, then someone blew it big time," he joked.
"I'm looking forward to it warming up, probably like most people.
Fourteen is a lot better than 8 below," he said.
The warmest part of Sunday likely will come close to 6 p.m., again, when it is dark out.
It could get as warm as 31 degrees, Mott said.
Light snow is expected to start falling early Sunday and lead to accumulations of up to 2 inches, according to the weather service. By Wednesday, temperatures could be in the mid-40s, with another drop in temperature expected by Thursday night, forecasts show.