Off we go! The highest active volcano in Eurasia is the first volcano activity report of 2018 as The Klyuchevskoy Volcano spews ash 5.5 km high! 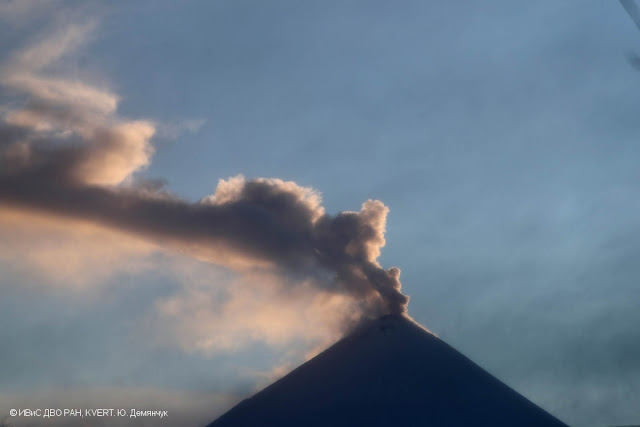 It's exciting, it's an old friend and it's the highest active volcano in Eurasia, the first volcano activity report of 2018...Off we go!
The Klyuchevskoy Volcano in the Kamchatka Region has been spewing up ash for three days in a row, the Kamchatka Volcanic Eruption Response Team (KVERT) at the Institute of Volcanology and Seismology of the Far Eastern Department of the Russian Academy of Sciences told TASS on Friday. "The volcano emitted ash as high as 5.5 km [above sea level.] The volcano itself is 4.75 km high," the response team specified.
The ash spread 92 km in a north-western direction from the volcano.
This is the third time Klyuchevskoy erupted ash in 2018.
On January 3, it spewed up ash as high as 6 km, and on January 4 an orange hazard code was declared for aircraft after the second eruption at the same height.
Klyuchevskoy is Eurasia's highest active volcano, reaching 4,750 meters high, and one of the most active on the peninsula.
In 2016, up to 10 lava flows oozed down its slope simultaneously during an eruption.
The nearest community - the village of Klyuchi in the Kamchatka Region- is located 30 km away from the volcano base.
Ash falls are frequently observed there during eruptions.

The last big eruption was reported on the morning of May 18, 2017, according to the image data of the Kamchatka Volcanic Eruption Response Team (KVERT), a column of ash was registered above the Klyuchevskoy volcano was said to have reached 6,000 meters.
The volcano is 4,750 meters high," the press service said.
The aviation colour code was then raised to orange.
The ash covered the areas located 72 kilometres north-east of the volcano.
There are no settlements in the area.
The Klyuchevskoy (Klyuchevskaya Sopka) is the highest active volcano in Eurasia.
The volcano is approximately 7,000 years old.
There are currently four active volcanoes on the territory of the Russian Far Eastern Kamchatka region - Klyuchevskoy, Shiveluch, Bezymyanny, and Karymsky.