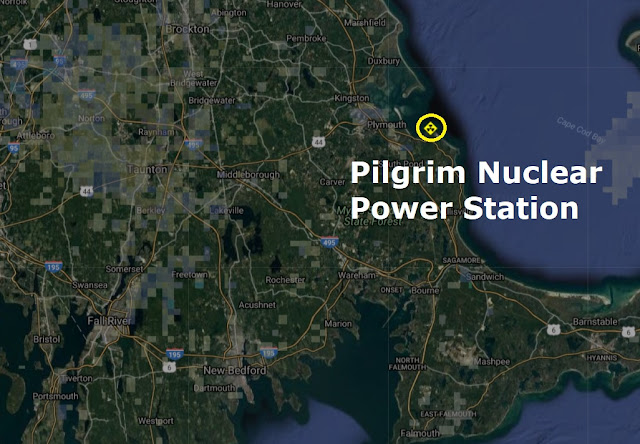 RSOEE Alert map
During the height of Thursday's storm, operators manually shut down Pilgrim Nuclear Power Station after one of the two main 345-volt lines that provide offsite power to the plant "became unavailable," according to Nuclear Regulatory Commission spokesman Neil Sheehan.
"There have been no complications with the shutdown thus far," Sheehan wrote in an email.
The emergency generators were fired up to power cooling and other emergency systems functioning, even though the second 345-volt line, along with a smaller line, from offsite remained in service. Patrick O'Brien, a spokesman for Entergy Corp., Pilgrim's owner and operator, said plant managers decided to use the diesel generators for safety systems because of their reliability.
Plant watchdogs had been calling on federal regulators to order Pilgrim's reactor shut down since Wednesday, when strong winds and flooding were forecast.
The NRC left it to Pilgrim's management, along with three federal inspectors onsite at the plant, to make the call. O'Brien had said late Wednesday there were no plans to power down the reactor in anticipation of storm-related problems.
Shortly before 4 p.m. Thursday, O'Brien issued a statement saying Entergy is working to determine the cause of the loss of the power line.
"Pilgrim had been safely operating for 227 consecutive days following the completion of our most recent refueling outage in May 2017," he wrote.
"We will take this opportunity to conduct preventive maintenance that we could not otherwise perform with the plant operating at full power."
Mary Lampert, president of Pilgrim Watch, said her group had asked federal regulators to order the reactor shut down as a pre-emptive measure. "So much for (Energy Secretary Rick) Perry's and Trump's faith in nuclear as providing reliable power,"
Lampert said shortly after the reactor was manually powered down.
"It's only Jan. 4. We're off to a good start."
A January blizzard in 2015 resulted in an emergency shutdown that was accompanied by a number of system problems.
Those storm-related difficulties pushed Pilgrim into Column 4, causing it to be one of the country's worst performing reactors.