200 dead around 200 missing 70,000 homeless in the Philippines from tropical storm Tembin 37 more dead in a separate fire incident 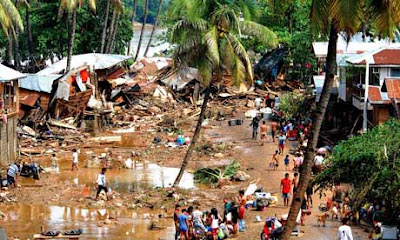 Rescuers in the Philippines are searching for around 200 people after another 200 have died with thousand 70,000 homeless due to floods and landslides wreaked by tropical storm Tembin on the southern island of Mindanao from late on Friday.
The disaster comes just days after tropical storm Kai-Tak killed a further 54.
The Philippines is battered by about 20 typhoons a year and warnings are routinely issued, but the level of this storm came as a surprise.
“It happened very fast, the flood waters quickly rose filling our house,” farmer Felipe Ybarsabal, 65, told Reuters by telephone, saying he and his family had to run to higher ground.
According to Reuters, many villagers had ignored warnings to leave coastal areas and move away from riverbanks and got swept away when flash floods and landslides struck.
The storm was moving west on Sunday, over some outlying Philippine islands and the South China Sea toward southern Vietnam, at a speed of about 20 kph (12 mph).
It intensified into a typhoon with winds of 120 kph (75 mph) as it moved out of the Philippine area of responsibility, the national meteorological agency said.
And in a separate incident, the BBC reported at least 37 people are feared to have died in a fire that tore through a shopping mall in the southern Philippine city of Davao.
Firefighters battled for hours to extinguish the blaze that started on the third floor and spread to the floor above, trapping call centre employees.
Their chances of survival were "zero", Davao's Vice-Mayor Paolo Duterte said.