Calm before the storm? August continues massive downward trend in quakes of mag 6 or higher: Should the alarm bells be ringing? 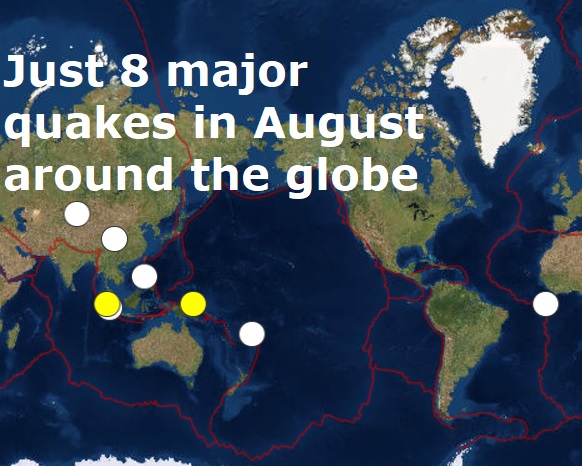 So what is causing the decline? I have no idea but I would like to point you toward volcano activity which also appears to have decreased this year dramatically with only 13 confirmed eruptions up to May 23rd this year, not quite on the scale of the major quake decrease but never the less down on other years.
We are approaching a solar minimum,.
The sun is heading into a period known as solar minimum, during which activity at the surface will ‘change form.’ In this time, certain types of activity, such as sunspots and solar flares will drop – but, it’s also expected to bring the development of long-lived phenomena including coronal holes. According to NASA, solar minimum could also enhance the effects of space weather, potentially disrupting communications and navigation systems.
The sun follows roughly an 11-year cycle.
While sunspots were relatively high back in 2014, they’re now heading toward a low point expected in 2019-2020, according to NASA.
Does space weather effect quakes and volcano activity on Earth, of course it does and it's clear to see on the graph above major quakes of decreased since 2014 but is this the result in the drop off of sunspots, I can't say, time will tell what is happening and lets hope it's not the calm before the storm.