We got lucky! Monster sunspot AR2665 which faced Earth two weeks ago ejects a massive flare as big as the Carrington event and it's coming back

NASA's STEREO-A spacecraft, which has a partial view of the sun's farside, identified the source of the blast as active sunspot AR2665

A massive flash on the far side of our Sun have the experts very excited as they believe it might have been the most intense kind of X-class flare, the sort that can knockout satellites and electrical equipment here on Earth.
It came from the massive sunspot AR2665 which was facing Earth just two 2 weeks ago when it fired off three big M-class flares, one of them being the biggest since April 2017.
The monster sunspot AR2665 is not finished however, and could well be facing Earth again next week as the as it swings round on the Sun's rotation. 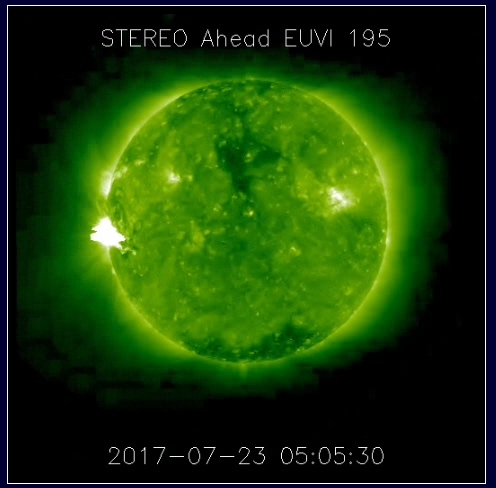 According to Sacewather.com today's farside explosion occurred on the 5th anniversary of another significant farside event: The Solar Superstorm of July 23, 2012.
That superstorm, which has been compared to the historic Carrington Event of 1859, could have caused widespread power blackouts if it had not missed our planet.

The Solar storm of 1859—known as the Carrington Event was a powerful geomagnetic solar storm during solar cycle 10 (1855–1867).
A solar coronal mass ejection hit Earth's magnetosphere and induced one of the largest geomagnetic storms on record, September 1–2, 1859.
The associated "white light flare" in the solar photosphere was observed and recorded by British astronomers Richard C. Carrington (1826–1875) and Richard Hodgson (1804–1872).
Studies have shown that a solar storm of this magnitude occurring today would likely cause more widespread problems for a modern and technology-dependent society.
The solar storm of 2012 was of similar magnitude, but it passed Earth's orbit without striking the planet.
Telegraph systems all over Europe and North America failed, in some cases giving telegraph operators electric shocks.
Telegraph pylons threw sparks, some bursting into flames.
Some telegraph operators could continue to send and receive messages despite having disconnected their power supplies.
Auroro's
The aurora was visible as far from the poles as Sub-Saharan Africa (Senegal, Mauritania, Monrovia, Liberia), Monterrey and Tampico in Mexico, Queensland, Cuba, Hawaii, and even at lower latitudes very close to the equator, such as in Colombia.