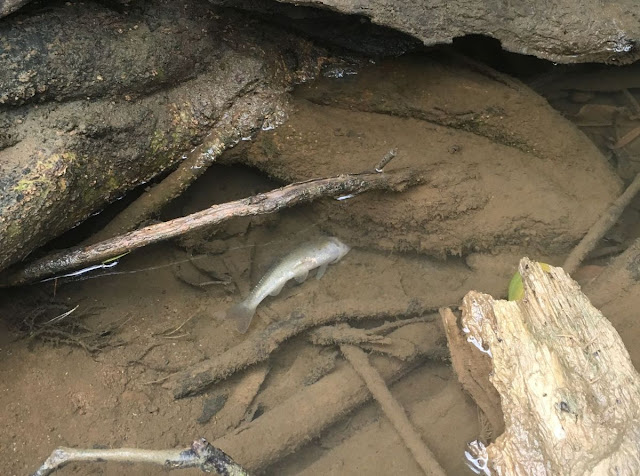 Photo roanoke.com
Fallout continued Sunday after Saturday's chemical spill into Tinker Creek.
The Virginia Department of Emergency Management now says it believes 165 gallons of Termix herbicide leaked into Tinker Creek Saturday morning.
Homeowners as far as five miles down-stream from the leak say they're seeing more dead wildlife, and now, they're worried about long-term consequences.
Stephen Rossi and his grandkids spend many weekends feeding the fish down on Tinker Creek, but this time, none are biting.
"Around four o'clock, we started seeing fish dying.
Fish were dying by the hundreds," said Rossi.
Rossi says, thanks to Saturday's herbicide spill, those fish now line the bottom of his creek, but he says that's not his biggest concern.
"There's no birds, there's no insects, and I hope that doesn't mean that something very, very serious has happened," said Rossi.
Even Rossi's bees that he keeps appear to have fallen victim to the water contamination.
Rossi estimates that during Saturday's chemical spill, about two-thirds of the bees in his beehive were killed by drinking the water out of the stream.
"They started to have a major die-off.
There was probably thousands in a circle on the bottom, on the ground, unable to fly, paralyzed or whatever, and so what I did was I took and brought some fresh water up," said Rossi.
Now, Rossi is concerned his own drinking water supply might be contaminated.
"We have a spring here right next to the creek.
We use it for geothermal heating and cooling of our house, and we can drink it, but of course we won't," said Rossi.
The Virginia Department of Emergency Management is checking wells and springs like Rossi's close to Tinker Creek.
One home services specialist WSLS spoke with says for now, only trust bottled water.
"Do not boil the water.
Boiled-water is good for a bacteria agent or any bacteria in the water.
It won't kill a chemical.
If anything it might intensify it, depending on the chemical agent," said Ted Puzio with Southern Trust Home Services.
The Virginia Department of Environmental Quality is now investigating to learn the extent of the damage.
The agency spent Sunday digging up soil at the site of the spill to keep the chemical from leaking into the ground water.
VDEQ will have biologists out taking samples of water in the creek starting Monday. Rossi says, he's hoping for the best.
"I hope there's some mitigated circumstances that will make it not as bad as it looks today," said Rossi.