The cruelest of mankind: Chickens too fat to stand; never see daylight; frequently die before they reach maturity and are left covered in their own faeces 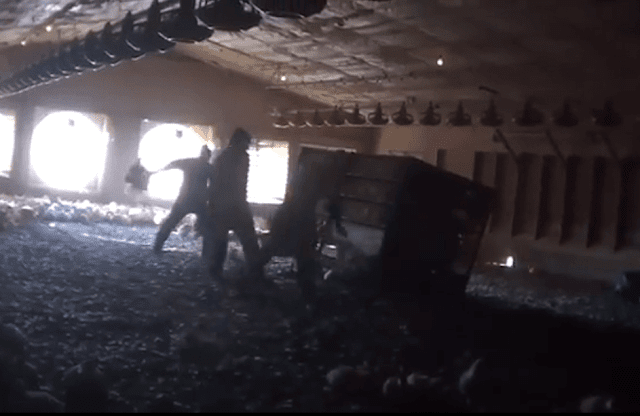 Photo thesun.co.uk
Warning this story is not for the faint hearted...
As the British government decide weather to import American Chickens to UK shops, horror story's of the treatment of these innocent creatures are hitting the British media.

Exposed: The REAL reason America's 'Frankenchickens' have to be washed with chlorine as US industrial farming practices are exposed.
Too fat to stand and their flesh rots while they're alive
Birds are crammed into warehouses and are so heavy they buckle under weight.

Chlorine-washed chickens to on go on sale in British shops in a post-Brexit trade deal last week has exposed the reason why American Chickens needs such drastic chemical treatment but that is just an indicator to the horrendous conditions these poor birds have to endure.

Now whistleblower farmers have revealed the full horror of the suffering to The Mail on Sunday, including how: Tens of thousands of super-sized 'Frankenstein' birds are crammed in vast warehouses.
The chickens, which weigh up to 9lb, often buckle under their weight and must live without natural sunlight.
Chickens frequently die before they reach maturity and many are left covered in their own faeces, turning warehouses into vile breeding grounds for disease.
Unlike in the UK and Europe, there are no minimum space requirements for breeding chickens in the US.
America also does not have any rules governing lighting levels in the sheds and, crucially, its farms have no maximum allowed level of ammonia, which indicates how much urine and faecal matter is present.
This means there is no limit on how much can fester inside the sheds.
There is no legal requirement to wash US chickens in chlorine or other disinfectants, but 97 per cent of its birds are cleaned in this way after slaughter.
'They spend 95 per cent of their time sitting on the litter, a mixture of pine shavings and faecal matter from that flock and prior flocks.'
He said 1,000 of the 30,000 chickens he raised every six weeks would die before they reached maturity.
Many become infected on the underside of their chest because of contact with the litter.
He added: 'Their flesh would rot and, when you have them crammed in so tight, they will walk over other birds if they want to get to the food or scratch the others and cause a wound.
It is awful.'
Mr Watts, a married father- of-three, quit the poultry business two years ago because he was disgusted by its practices.