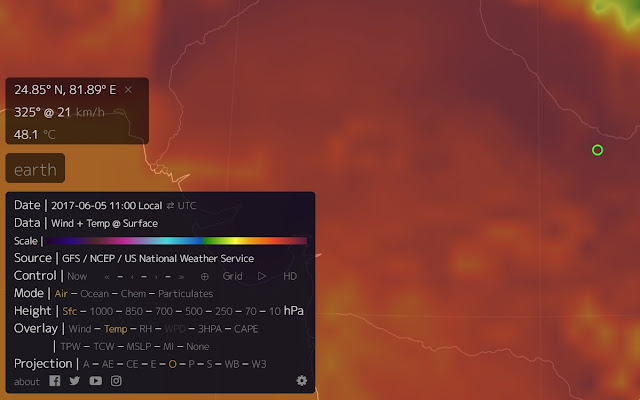 At least ten persons have reportedly died due to the heat wave in various parts of Uttar Pradesh in the last 24-hours, an official said on Tuesday.
The number of patients with heat stroke conditions, diarrhoea, vomiting and high fever has increased in hospitals across the state.
Bundelkhand is the worst hit with mercury logging an average of 47 degrees Celsius in most districts. Banda and Mahoba continue to simmer under an unprecedented heat wave.
Officials say four persons died in the Bundelkhand region while six children died in the Avadh region owing to heat stroke and 'loo' warm winds.
Temperature is hovering at around 46 degrees in Etawah, Mainpuri, Unnao, Kanpur, Lucknow, Fatehpur, Hardoi and Auraiyya. In Poorvanchal the maximum temperature recorded in Mirzapur is 46.4 followed by Sonebhadra at 45.6 and Varanasi at 45 degrees Celsius.
Districts in western Uttar Pradesh, Bijnore, Saharanpur, Baghpat, Muzaffarnagar, Meerut, Bulandshahr remain extremely hot with average maximum temperatures being 42 degrees Celsius. The Met office has predicted some respite as some parts of the state are likely to receive some drizzles and dust storm which is likely to bring down temperatures a bit.