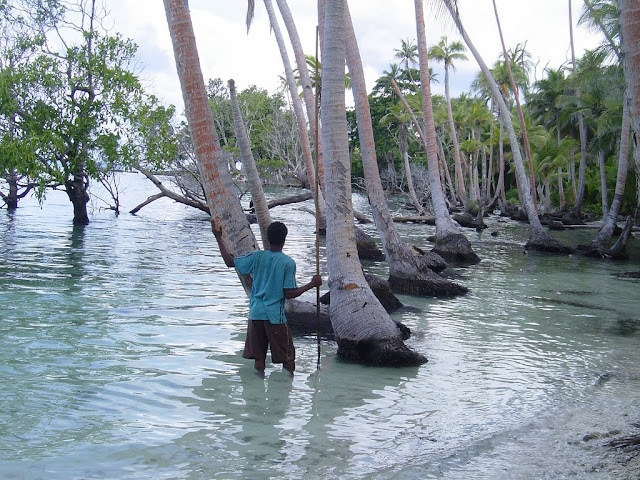 Photo sprep.org
It's one of the most active earthquake area in the world but locals are worrying about another problem and it is an issue many Solomon Islanders cant ignore.
But just a 90-minute boat ride from the capital, climate change is destroying land and the livelihoods of many islanders.
Sea level rises have become a major concern for Russell Islanders, with huge chunks of coastline in the area now washed away.
Last week SIBC toured the Russell Islands and witnessed firsthand the damages caused by sea level rise to some of the smaller islands.
Alfred Kakaleu, from Karamulun Island in the Russell Islands told SIBC that people in his island were starting to feel the impact of sea level rises.
"This has been a common problem for us over the years," "People of Karamulun are now feeling vulnerable because the ocean is now leveled with the land and no longer with the sand," He said.
Mr Kakaleu said vast areas surrounding Karamulun has been washed away and destroyed over the years.
"The island is now getting smaller because large portion of the island has already been damaged by the sea level, and some people have to move their houses further inland to safer grounds" he said. "Several years ago we built houses further out, but now the ocean has destroyed parts of the island," he said, as he pointed to an area which had been taken over by the ocean.
He said this has also affected their water supplies from their wells, as during high tides, the majority of water source around the island dries up.
"Because it is quite the opposite here, when the tide rises all our wells dry up, and we have travel long distances by canoe to collect fresh water".
He also said forced villagers have to travel long distances to collect fresh water from nearby islands, which he said was sometimes costly and dangerous.