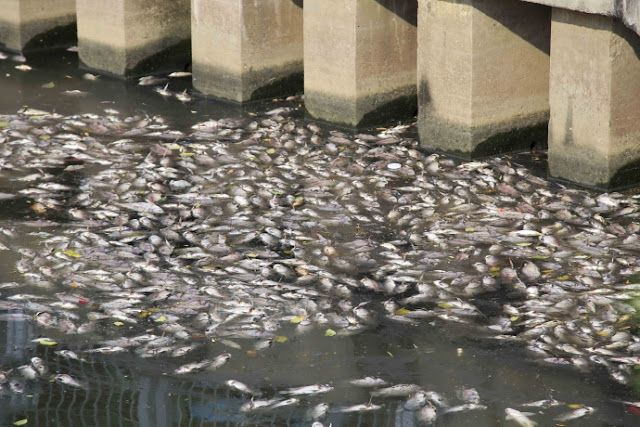 Photo vietnambreakingnews.com
Thousands of fish suddenly died in the Nhieu Loc-Thi Nghe Canal, HCM City, on May 16.
The dead fish can be found floating from Dien Bien Phu Bridge in Binh Thanh District to Bridge 6 in Phu Nhuan District.
From Bong Bridge to Hoang Hoa Tham Bridge, the dead fish almost covered the whole water surface.
Rubbish was also floating along with the dead fish which include carps, tilapia, perch and other fishes.
Many fish are already decomposing.
Nguyen Van Tu, a local in Binh Thanh District, said fish started dying since earlier that day.
"The heavy rain yesterday might have swept the rubbish into the canal and caused pollution.
I often fed them with bread but today, no fish surfaced to eat.
Maybe it's another mass fish death like previous years," he said.
HCM City authorities proposed in April to drain the wastewater in the sewer and water in the canal to Saigon River to reduce pollution and save the fish.
For the past three years, many fish have died in the canal.
Last year, nearly 10 tonnes of fish died during the transition from the dry to rainy season.
This reached 20 tonnes in 2015 and 70 tonnes in 2016.
There is another proposal to reduce a third of 470 tonnes of fish living in the canal, most of them are tilapia.
A vast amount of fish have been released by the people on special occasions and multiplied as tilapia has a fast breeding rate.
The canal is overloaded and can't provide enough space and food to the fish.