Pelicans and other species of aquatic birds dying in Florida after being disoriented and bleeding from the mouth: Reason unknown 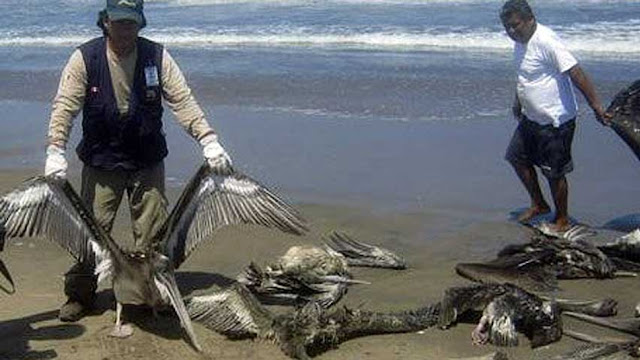 Pelicans and other species of aquatic birds are reportedly dying off from the coast near Amelia Island all the way south to Ponte Vedra Beach, sea life researchers say.
Researchers with the Florida Sea Grant Extension of Northeast Florida, a part of the Unversity of Florida/IFAS Extension Program based in Flagler County, say ospreys, pelicans, gulls, and anhingas are a part of this die-off.
These birds appear to become disoriented, the researchers say, and somehow find themselves far from the ocean and their habitats.
Their feathers become dry, brittle, bleached and lack proper waterproofing.
Some can even be seen bleeding from the mouth.
The majority of the sick birds are near the mouth of the St. Johns River, researchers say.
Possibly related is a rainbow-colored sheen atop sea form at the beach of Little Talbot.
Sick pelicans have also been spotted in the lake at the Guana Wildlife Management area. Veterinarians with the Florida Fish and Wildlife Conservation Commission have collected the carcasses of some of the birds and are testing them to find out more information.
Sea Grant Extension researchers say if you see find dead birds, report them to the Florida Fish and Wildlife bird mortality database at this: Link
Don't touch them.
If you see any sick birds that sound like the ones in this report, email Anna Deyle, NE assistant regional species conservation biologist at this address.
If you can, include photos but don't touch the birds.