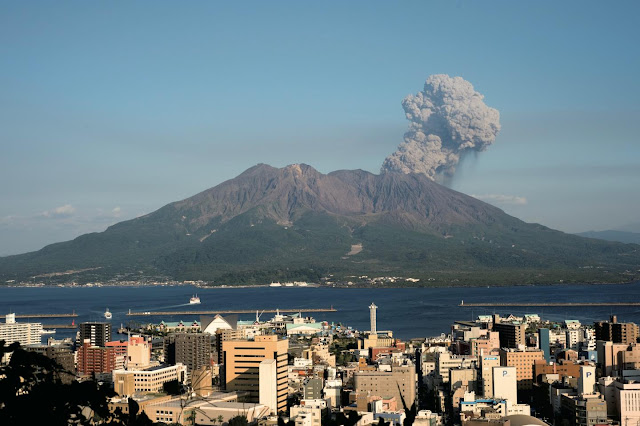 Photo ibtimes.co.uk
Since its re-awakening in late March, the Sakura-Jima Volcano, Kagoshima Prefecture, shows the Volcano is erupting once again frequently.
More details volcano seems to be back in its typical activity of intermittent small to moderate vulcanian explosions at rates of typically 2-3 per day.
It also seems that since late April, it has picked up again to levels similar as during much of 2013-15, with sometimes larger explosions that generate tall ash plumes of up to 4-5 km height.
Most of the explosions come from the younger Showa crater on the upper eastern flank, although some also occur from the older summit vent Minamidake.
During the past days, 2-3 explosions have occurred each day, with ash plumes that rose to between 5,000 and 13,000 ft (1,500-4,000 m) altitude, i.e. ranging from a few hundreds to approx. 2,500 km. This activity has has been characteristic of the volcano for most of the past years, with an unusual pause during late July 2016 and March this year.