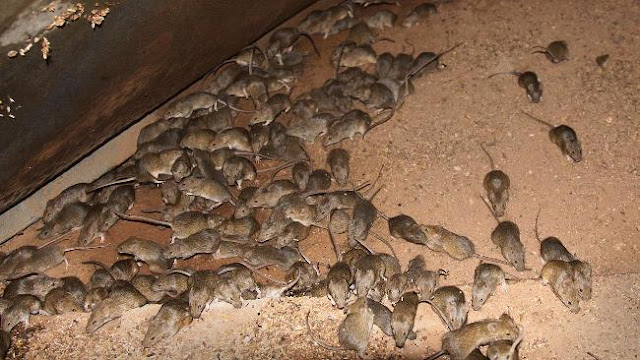 Photo pestcontrolempire.com.au
Mice are running rampant in the homes of Melbourne residents.
The rodents have taken over the city in plague-like proportions with residents contacting pest control services reporting they have been inundated by mice.
Adam Pest Control's Peter Taylor said the mice have moved in from the country and agreed the city was in the grip of a mouse plague, in an interview with 3AW.
'Spring was very conducive to the breeding of mice.
The population's quite large, and because we're now getting colder weather they're all coming inside,' Mr Taylor said.
'We've been pretty busy since March with a lot of staff doing overtime.
'It started in the country and now it's moving into the city, first to the outer suburbs and now even into the CBD.'
Mr Taylor said the mice were looking for protection from the weather and suggested the best way to prevent mice from coming inside was 'to fix every hole you could see' around the house.
A caller to the radio station's Ross and John program, who lives in the Malle region in the north-western part of Victoria, had previously said they had trapped 62 mice in just one day.
Another caller from Traralgon, in eastern Victoria, said the town had sold out of mouse traps.
Home
The Wire
at May 22, 2017