A mag 6.4 - 30km WSW of Tanaga Volcano, Alaska is the third major quake of May: Calm before the storm? It's another volcano quake 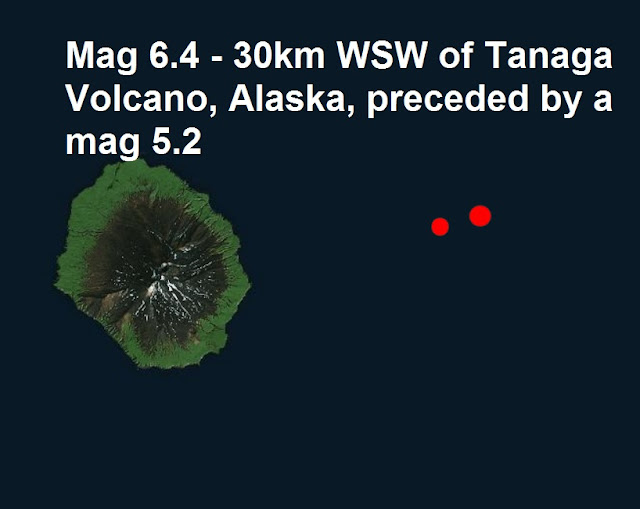 USGS
A mag 6.4 - 30km WSW of Tanaga Volcano, Alaska is the third major quake of May and all of them have happened in Alaska.
No tsunami Warning, Advisory, Watch, or Threat from this quake
Tanaga is a 5,924-foot (1,806 m) stratovolcano in the Aleutian Range of the U.S. state of Alaska. There have been three known eruptions since 1763. The most recent was in 1914 and produced lava flows.

It is the 27th major quake of a so far record breaking incredible low count for 2017
A cluster of 136 aftershocks mag 2.5 or higher in the Saint Elias Mountains have been recorded since a magnitude 6.3 and a magnitude 6.2 struck Skagway Alaska last week.
Yesterday Iceland was described as a ticking time-bomb as a 4.5 magnitude earthquake originated in the domain of an active volcano Hekla.