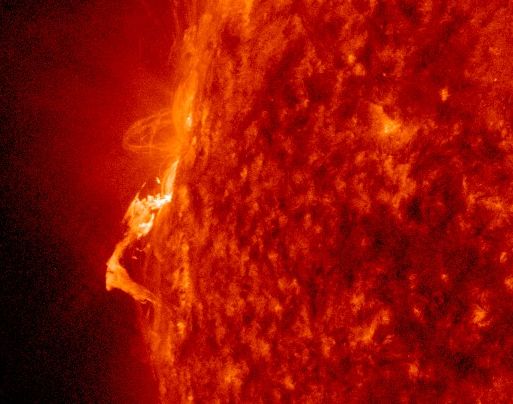 Spaceweather.com
During the late hours of April 17th, something hurled a plume of hot gas over the eastern limb of the sun. NASA's Solar Dynamics Observatory photographed the splash: The source of this activity is probably returning sunspot AR2644. In early April the active region produced a series of M-class solar flares and shortwave radio blackouts. Now, following a two week trip around the farside of the sun, AR2644 is due to return. If it returns with any of its old potency, solar flare activity could increase sharply in the days ahead, reports Spaceweather.com.

At the beginning of April Sunspot AR2645 grew from nothing into a sprawling behemoth more than 120,000 km wide, with multiple dark cores larger than Earth.
Sunspot AR2645 woke up our star from a deep slumber and delivered six M-class solar flares in the first three days of April: It is still almost 2 years since she fired off an X-class flare however.

As two massive Coronal Holes cover the Earth facing part of the Sun and thought to be the main quake and volcano activity factor there is still no sign of major quakes and the first 4 months of 2017 have recorded the lowest amount of major quakes in nearly 60 years with a meager 22 so far this year.
However Costa Rica's Turrialba volcano and Poas volcano have erupted and a volcano on Manam Island in Bogia, Madang Papua New Guinea erupted on Sunday 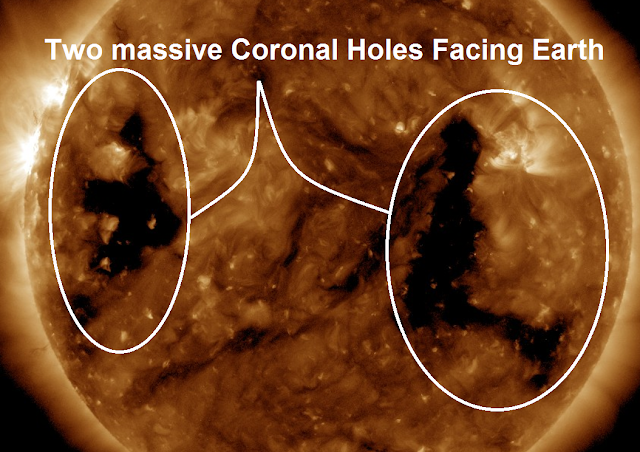 Spaceweather reports: Solar wind flowing from the indicated coronal hole should reach Earth on April 18-19. Credit: NASA/SDO. solar wind stream expected to reach Earth yesterday is still en route.
NOAA forecasters say there is a 55% chance of polar geomagnetic storms on April 18th when the tardy stream arrives.
The solar wind is flowing from a large hole in the sun's atmosphere, and could influence our planet for 2 to 3 days.
Stay tuned for more Space updates.