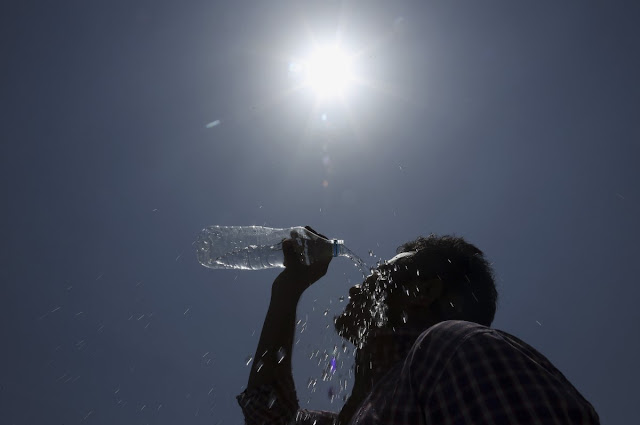 While the extreme heat will briefly fade across northwestern India this week, dangerously hot temperatures will remain elsewhere across the country.
Thursday marked the hottest April day for New Delhi since 2010.
"Temperatures soared to 43.2 C (109.8 F) at Safdarjung Airport and 44.9 C (112.8 F) at the Indira Gandhi International Airport on Thursday," AccuWeather Senior Meteorologist Kristina Pydynowski said.
"Safdarjung, which is located closer to downtown New Delhi, has not recorded a temperature that high since the middle of April 2010," she said.
The extreme heat has prompted officials in Telangana to commence summer vacations early for all schools starting on Friday, according to the Times of India. Schools will also be closed in Tamil Nadu.
Temperature in Telangana claimed 40 more lives in the State.
The highest death toll recorded is in Karimnagar District alone, while Khamam and Nagarkurnool recorded 4 death's each and Bhadari recorded 3 deaths. Ranga Reddy District, Mabubnagar, Manche-rial and Kamareddy recorded 2 deaths each district while single death each district is recorded in Sangareddy, Medchal, Warangal (Urban and Rural), Mahbuba-bad, Siricilla, Suryapet, Wanaparthy.
The report submitted by the The State Disaster Management Authority (SDMA) to the government states the high temperature all over the State.
Three-member committee is formed including a local mandal revenue officer, sub-inspector of police, and a medical officer in mandal by the District Collectors to enquire about the death of victims due to heatwave.