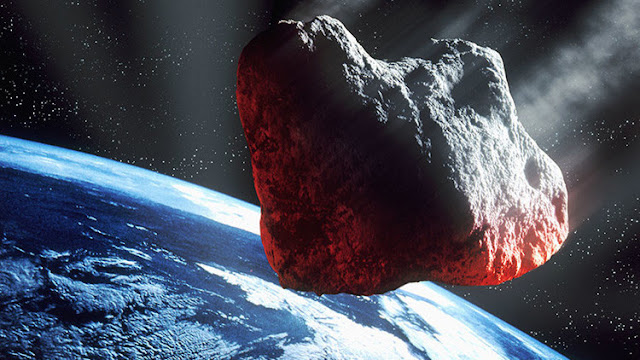 Photo tvqc.com
A relatively large near-Earth asteroid discovered nearly three years ago will fly VERY CLOSE past Earth on April 19 at a distance of about 1.1 million miles (1.8 million kilometers), or about 4.6 times the distance from Earth to the moon.
Although there is no possibility for the asteroid to collide with our planet, this will be a very close approach for an asteroid of this size.
The asteroid, known as 2014 JO25, was discovered in May 2014 by astronomers at the Catalina Sky Survey near Tucson, Arizona -- a project of NASA's NEO Observations Program in collaboration with the University of Arizona.
(An NEO is a near-Earth object). Contemporary measurements by NASA's NEOWISE mission indicate that the asteroid is  bigger than the rock of Gibralter in size, and that its surface is about twice as reflective as that of the moon.
At this time very little else is known about the object’s physical properties, even though its trajectory is well known.
The asteroid will approach Earth from the direction of the sun and will become visible in the night sky after April 19.
It is predicted to brighten to about magnitude 11, when it could be visible in small optical telescopes for one or two nights before it fades as the distance from Earth rapidly increases.

This computer-generated image depicts the flyby of asteroid 2014 JO25. The asteroid will safely fly past Earth on April 19 at a distance of about 1.1 million miles (1.8 million kilometers), or about 4.6 times the distance between Earth and the moon. Credits: NASA/JPL-Caltech