More warming NOAA: March and year to date were 2nd warmest on record for world 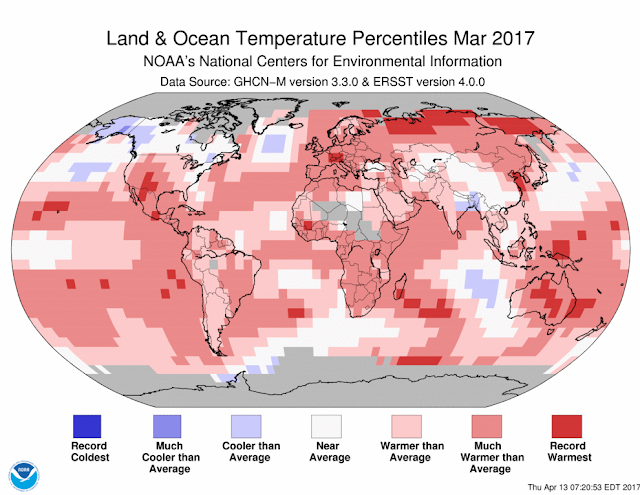 Click on image to enlarge
According to a new report from NOAA March and year to date were the 2nd warmest on record for world.


Arctic and Antarctic sea ice extents remain record-low, which is a subject we covered on The Big Wobble of course.


NOAA goes on to report; hot on the heels of the second warmest winter in the 138-year record, March continued the global warm trend that could last well into this year — especially with increasing chances for the arrival of another El Nino by late summer or fall. 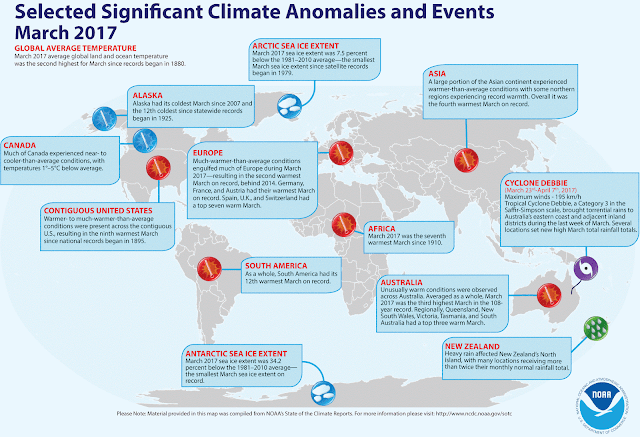 Here are a few highlights...


Climate by the numbers


March
The March 2017 average global temperature was 1.89 degrees F above the 20th-century average of 54.9 degrees, according to the analysis by scientists from NOAA’s National Centers for Environmental Information. This was the second highest for March in the 1880-2017 record, behind last year by 0.32 degrees. This also marks the first time the monthly temperature departure from average surpassed 1.8 degrees F in the absence of an El Nino effect in the tropical Pacific Ocean.
Year to date | January through March 2017
The year-to-date average temperature was 1.75 degrees F above the 20th-century average of 54.1 degrees. This was the second-highest first quarter of the year on record, behind 2016 by 0.32 degrees F.
Other notable climate events and facts around the world last month included:
More record-low sea ice extent at the poles
Near-average snow cover in the Northern Hemisphere
Warmer-than-average lands and oceans
Global warmth varied by continent
Europe and Oceania had their 2nd warmest March on record; Asia, its 4th; Africa, its 7th; South America, its 12th; and North America, its 30th. You can find NOAA’s report and download related maps and images by visiting the NCEI website