It's Back! A massive coronal hole which sprayed Earth with 700 kilometer per second solar wind in early and late March is set to return next week. 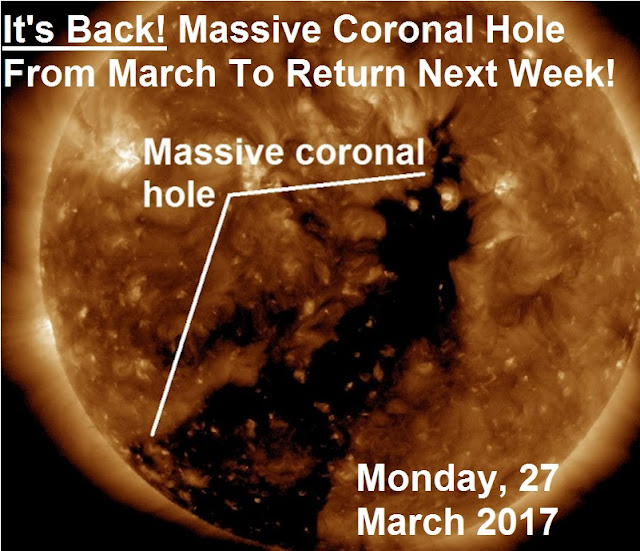 Photo SDO
Spaceweather.com are warning us of a massive Coronal hole which sprayed Earth with 700 kilometer per second solar wind in early and late March is set to return next week.
NOAA forecasters say there is a chance of G1-class geomagnetic storms on April 22nd intensifying to G2 storms on April 23rd in response to a repeat encounter with the solar wind stream.
We've seen this coronal hole before.
In early March, it lashed Earth's magnetic field with a fast-moving stream that sparked several consecutive days of intense auroras around the poles.
The coronal hole is potent because it is spewing solar wind threaded with "negative polarity" magnetic fields.
Such fields do a good job connecting to Earth's magnetosphere and energizing geomagnetic storms.

SOLAR FILAMENT EXPLODES, HURLS CME: On April 9th, a dark filament of magnetism on the sun rose up and hurled a portion of itself into space.
NASA's Solar Dynamics Observatory recorded the eruption: Flying debris from the filament formed the core of a coronal mass ejection (CME).
A movie from the Solar and Heliospheric Observatory (SOHO) shows the cloud leaving the sun.
At first it appeared that the CME would miss Earth, but a new analysis by NOAA forecasters suggests that a glancing glow is possible on April 15th.
G1-class geomagnetic storms are possible when the CME arrives this weekend