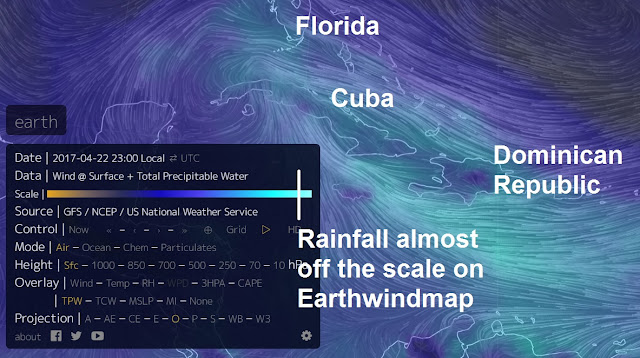 Earthwindmap
Insane amounts of rain have hit the Dominican Republic causing flooding.
“Staggering” amounts of rainfall over the last few days delivered an incredible 800% more than the month average in just 24 hours, almost 400 mm of rain has fallen in certain parts of the republic between 23rd and 24th of April with more more heavy rain to come.
In their latest report of 25 April, the Emergency Operations Centre (Centro de Operaciones de Emergencias – COE) says that flooding has affected several areas in Santo Domingo, San Cristóbal, Monte Plata, Sánchez Ramírez, Duarte and Barahona provinces.
Several rivers have overflowed, including the Ozama, Yuna, Cevicos, Manoguayabo and Haina.
As many as 3,429 homes have been damaged or affected by the flooding, with around 9 houses completely destroyed.
Emergency services and military have rescued 153 people.
COE says that 17,145 people have been forced to evacuate their homes.
Just over 300 people were being housed in official shelters in San Cristóbal (297) and Barahona (14). The heavy rain is part of the same server weather system that has brought flooding to Jamaica and Haiti over the last few days.
Floodlist.com reports; This is the second major flood event in 2 months in the Dominican Republic.
In March 2017 flooding in northern areas displaced around 1,7000 people.
Late last year the country suffered two devastating floods.
In October Hurricane Matthew caused deaths and major damage.
The following month several days of heavy rain caused flooding in northern areas once again, displacing around 20,000.