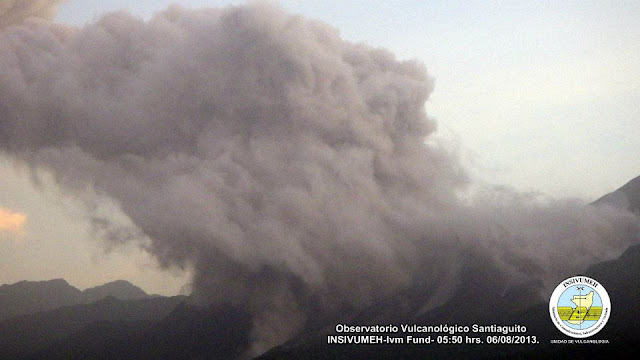 The Fuego volcano, located over 30 miles west of Guatemala City, erupts frequently.
Guatemala's Fuego volcano calmed down in the early hours of Sunday morning after more than half a day of activity, leaving behind remnants of lava flows.
"The third eruption (this year) of the Fuego volcano has finished after 16 hours," the country's national institute that monitors volcanic, seismic and meteorological data known as Insivumeh reported Sunday morning.
Columns of volcanic ash shooting out of Fuego, which translates to "fire," reached over 16,000 feet, falling nearly 50 miles away from the peak in the areas of Atitlan Lake, Chicacao, Mazatenango, Retalhuleu, El Palmar and other locations, officials reported.
The volcano is located over 30 miles west of Guatemala City, and the ashes from the eruption fell on areas further west.
Insivumeh reported that volcanic activity had normalized by Sunday morning, but called on disaster and emergency response officials to take necessary precautions in light of the risk of further debris and volcanic matter flowing down from the Fuego volcano.