State of Emergency issued in D.C. area, New York and New Jersey as blizzard takes aim at northeastern US 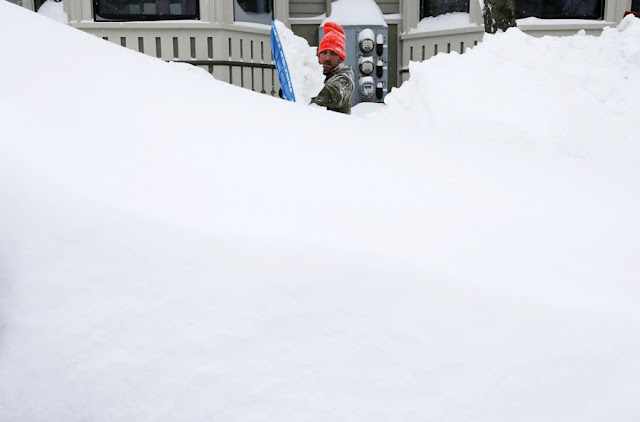 The much anticipated major winter storm is unfolding across the northeastern United States and will bring travel to a halt as it dumps heavy snow across the region.
Thousands of flights were canceled and school districts across the entire region were closed in advance of the nor’easter. Several states have declared a state of emergency, including New York and New Jersey and the D.C. area.


Heavy snow will continue to spread across the region through Tuesday, with blizzard conditions possible from northeastern Pennsylvania through Maine.
The governor has issued a state of emergency as a nor'easter starts to bring snow to Maryland overnight.
The National Weather Service issued a Winter Storm Warning beginning at 7 p.m. Monday and lasting through 2 p.m. Tuesday for western Maryland, the D.C. area, the Baltimore area and Cecil and Kent counties.
A Winter Storm Watch is in effect for Monday evening through Tuesday afternoon south of Baltimore.
A wind advisory takes effect for the lower Eastern Shore from 6 a.m. to 1 p.m. Tuesday.
Wind gusts could exceed 30 mph.
Gov. Larry Hogan signed an executive order declaring a state of emergency in Maryland beginning Monday at 9 p.m.
The measure allows the coordination and activation of resources, the governor's office said.
"Our state is taking every precaution and coordinating all available resources to respond to this winter storm," Hogan said in a statement.
"We urge all Marylanders to use common sense and to stay indoors and off the roads.
A state of emergency means that residents need to remain alert and regularly check for updated weather forecasts as conditions change."
The heaviest snow is expected in the early morning hours of Tuesday.
Then, a mix of sleet and rain is possible before the storm turns back to all snow later Tuesday morning.
Periods of lighter snow or snow showers will continue into Tuesday evening.
The computer models continue to show the rain-snow line moving into the Baltimore area, which means sleet and rain could cut down on snowfall amounts.
The position of the area of low pressure is important.
If the storm tracks closer to the coast, there will be more sleet and rain that could cut down on snow totals.
If the storm tracks farther out to sea, there will be more snow.

Meanwhile, a state of emergency has been declared throughout New York state as a "very dangerous" winter storm bears down.
The state of emergency begins at midnight, said Gov. Andrew Cuomo.
Non-emergency state workers in all but the North Country are being told to stay home, and much of the public transit will be suspended in New York City.
The state urges downstate commuters to stay home if possible.
Blizzard warnings have been expanded to include much of eastern New York and the Catskills.
It's the first blizzard warning for the Catskills since 2001, the National Weather Service office in Binghamton said.
"Extremely dangerous travel conditions due to snow covered roads, white-out conditions along with blowing and drifting snow," the Albany weather service office said.
Greyhound has canceled bus service throughout the Northeast.
Airports are already delaying or canceling flights.
The powerful nor'easter could dump up to 2 feet of snow in the eastern half of the state.
Winter storm warnings are in effect from West Virginia to Maine.