Popocatepetl volcano in Mexico has erupted again sending ash raining down on towns and villages in the neighborhood: Experts expect a bigger eruption 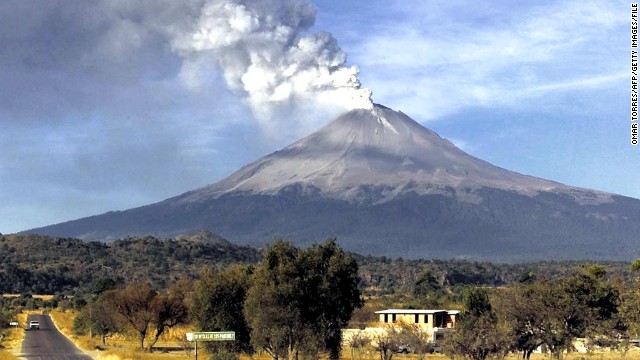 Getty Images
One of the most famous volcanoes in the world, the Popocatepetl in Mexico has erupted again.
It has erupted twice during this weekend, sending ashe all over its neighboring towns.
Popocatepetl volcano has erupted two times since Saturday evening.
The Mexican volcano has emitted hundreds of short, low-intensity bursts of gas and smoke, Mexican authorities said on Sunday afternoon.
Popocatepetl is located near Mexico's Puebla valley so the residents there are a bit happy that there was not much lava.
It is specifically located about 80 miles east of Mexico City.
Because of the eruption of the Popocatepetl volcano, the area is now under "yellow alert".
That means people should protect their food and themselves from falling ash.
Meanwhile, the authorities believed that the eruption is still ongoing even though the camera and the naked eye cannot see anything at the moment.
On Friday night, March 10, the volcano's crater lit up and it colored the sky with a brilliant display of orange fire.
Each and every time the volcano belched smoke, the color intensifies, Mexico's National Center for Disaster Prevention reported.
Just last year, Mexico's largest and most feared volcano, Popocatepetl erupted.
It came back life again with a major eruption of very toxic smoke and ash caused by an earthquake in January this year.
It has feared many people.
Authorities said that it might lead to a bigger eruption, Express stated.
It has erupted many times last year but has stopped with minimal damage.
The eruption of the volcano can be seen if the sky is clear enough.
The neighboring volcano, Iztaccihuatl can also be seen clearly in the distance.
On the other hand, in North America, Alaska's Bogoslof volcano has also erupted, scaring people for the worst as many natural calamities have been occurring.