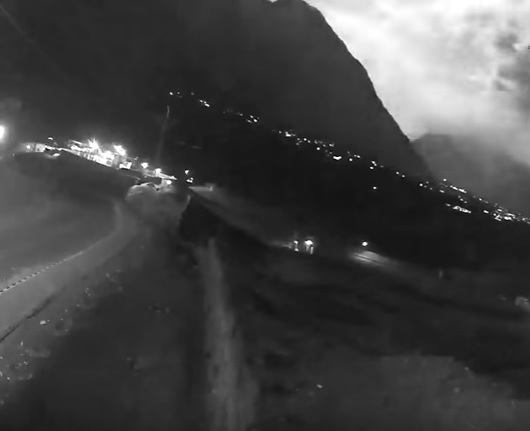 A suspected meteor lit up the skies in Gilgit-Baltistan late on Wednesday, leaving residents puzzled and terrified.
Bright light trails could be seen over G-B's skies only for only a few seconds, but the sonic boom that followed some five seconds later was more widely heard.
The 'blasts' could be heard in areas such as Gilgit, Ghizer, Diamer and Skardu at roughly 9:15 am.
"I was near my house when suddenly I saw a bright light in the sky," said Jehangir Naji, a Gilgit-based journalist.
"The light was followed by huge explosions," Naji added.
Shabuddin Ghori, another journalist in Chilas town of Diamer district posted online that the valley heard mysterious explosions after it was seemingly lit up by a star.
Jabir Ali, another resident, said that he saw a light heading towards Gilgit.
The Gilgit Information Department released a statement saying that a large meteorite has passed over Gilgit and Ghizer.
Further, the statement said, the object was travelling very low and illuminated the surrounding areas in the process.
"It broke the sound barrier, causing the 'explosions' heard in all villages from Gilgit to Shandur Top," the statement read. Meteors are pieces of comet or asteroid from outer space that create a fireball as they hit the Earth's atmosphere.
Those that survive the intense heat and friction and reach the surface without breaking up are known as meteorites, and are sought after by scientists for the information they can give information about the early solar system.
It was not clear if the meteor crashed or broke up in the sky.
The terrain between the city of Gilgit and the Wakhan Corridor is extremely remote and home to some of the highest mountains in the world.
There were no immediate reports of any meteor in Afghanistan.
The military released no official statement on the incident, and authorities from Pakistan's space agency, the Space and Upper Atmosphere Research Commission, could not immediately comment.