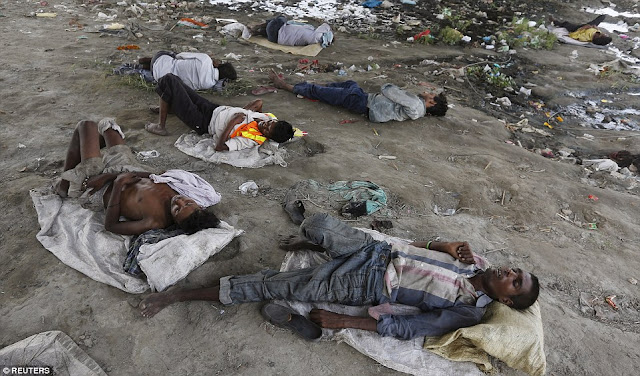 Photo dailymail.co.uk
Bhira, a small village in Maharashtra's Raigad district on Tuesday recorded a maximum temperature of 46.5 degrees Celsius as hot and dry winds from Kutch in Gujarat and central India continued to heat up central Maharashtra and Vidarbha.
In fact, the whole of India is reeling under intense heat wave with temperatures soaring to abnormal levels well ahead of the summer season.
A report in Skymet said that temperature in Bhira town of Mahrashtra's Raigadh district touched a searing 46.5 degrees on Tuesday.
Indian Meteorological Department officials expressed doubts over the unusually high temperature given Bhira is located in the Sahayadri region and is surrounded by mountains with thick forests.
The agency, however, decided to conduct an inquiry into the matter.
The Met said that it recorded 43 degree Celsius on Monday, but on Tuesday, the temperature was not recorded because it happened to be a holiday.
The extreme temperature, perhaps the highest in the country, is quite unusual for a place like Bhira that never crosses the 45 degree Celsius mark.
Officials from Mumbai will visit the observatory in Bhira on Friday to ascertain the reading. According to official data, Bhira was seven degrees above normal on Tuesday.
But, in Less than 24 hours, the maximum temperature dropped to 41 degrees Celsius.
The mean temperature in Bhira for the month of March between period of 1961 and 1990 was 39.3 degrees C, data indicates.
"This is very unusual, especially since the region is in the Konkan belt. Meteorologists would visit the site on Friday to ascertain the reading.
The observatory is a non-departmental observatory that is handled by the government but has a trained official who relays the readings to us," said Sunil Kamble, director in charge, India Meteorological Department, Mumbai.
According to Kamble, the observatory is surrounded by three hills and could have seen unusual heating.
A probe would reveal if the readings recorded were accurate, he said.
"On Wednesday, Bhira's temperature dipped drastically.
We suspect that the hot winds on Tuesday afternoon could have raised the temperature.
However, considering the wind pattern and all the other factors, we will study the observatory," Kamble added.
Bhira houses the third hydropower plant of Tata Power Company Ltd (TPCL), set up in 1927.
With as many as 13 observatories recording maximum temperature above 40 degrees C, weather forecasters believe the areas will experience a hot summer, with the area hotter by about four degrees. IMD issued a warning of continuing heatwaves at a few isolated places over Madhya Maharashtra and Vidarbha until Friday.
According to the IMD data, Malegaon, Nagpur, Chandrpur and Wardha had all recorded 43 degrees and were among the hottest parts of the state.
While Yavatmal and Nanded registered 42 degrees, Parbhani, Aurangabad and Gondia were 41 degrees.
All these places are believed to be experiencing moderate heatwave-like conditions. Mumbai had recorded 38.4 degrees Celsius on Monday but the mercury has since continued to drop and the maximum temperature on Wednesday was 33 degrees.