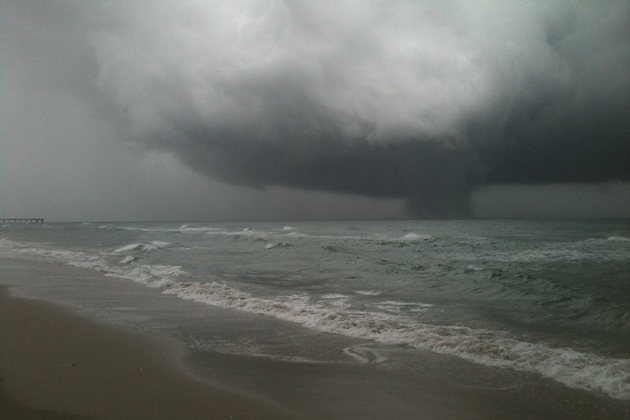 Photo newsradio1310.com
HOWLING winds, heavy rain and huge seas pounded Australia's northeast today, damaging homes, wrecking jetties and cutting power to thousands of people as Tropical Cyclone Debbie tore through Queensland state's far north.
Wind gusts stronger than 160 mph were recorded at tourist resorts along the world-famous Great Barrier Reef as the powerful storm, at category four just one rung below the most dangerous wind speed level, began to make landfall.
No injuries had been reported so far but the storm was travelling southwest so slowly that weather forecasters said cyclone conditions could persist for as long as 24 hours.
"It's very noisy: Screaming, howling wind ... sounds like a freight train," Jan Clifford said by text from Airlie Beach, about 590 miles northwest of the state capital, Brisbane.
Authorities had urged thousands of people in low-lying areas to flee their homes yesterday, in what would be the biggest evacuation seen in Australia since Cyclone Tracy devastated the northern city of Darwin on Christmas Day, 1974. 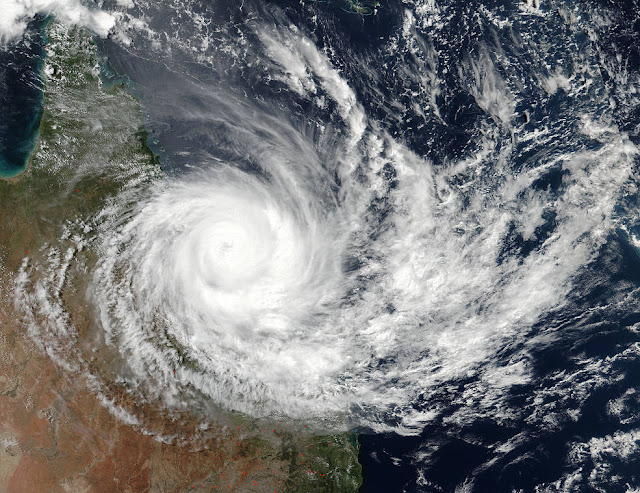 Cyclone Debbie made landfall at Airlie Beach shortly after midday local time (0200 GMT), knocking out telephone services.
Torrential rain flooded streets and wind smashed windows, uprooted trees and tossed debris through streets, while jetties at Airlie Beach marina were wrecked, pictures broadcast on Nine Network television showed.
Power was cut for 38,000 people in a wide area between the towns of Bowen and Mackay, north and south of Airlie Beach, utility Ergon Energy said. Ports at Abbot Point, Mackay and Hay Point were shut, Townsville airport was closed and airlines Qantas, Jetstar, Rex and Virgin Australia cancelled several flights to and from the region. 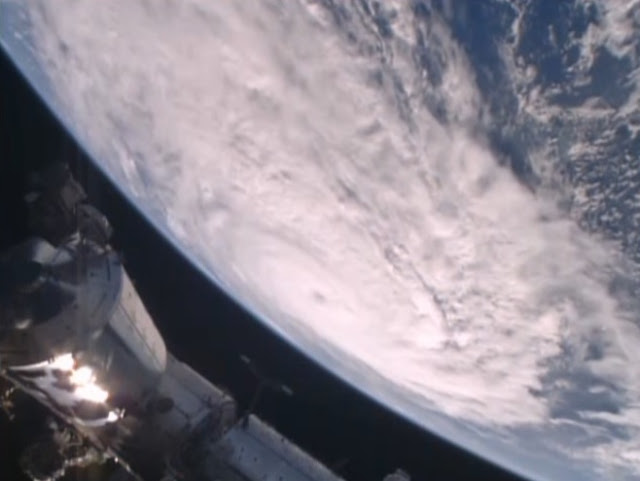 Cyclone Debbie from the ISS
BHP Billiton and Glencore halted work at their coal mines in the storm's path.
The cyclone had earlier swept through the Whitsunday islands further east, where tourist resorts were damaged and boats torn from moorings, guests told Reuters by phone.
Television pictures showed churning seas had washed away once-idyllic beaches.
Cyclone Debbie is the most powerful storm to hit Queensland since Cyclone Yasi destroyed homes and crops and devastated island resorts in 2011.
"The eye itself is probably 30 miles across," said senior forecaster Adam Blazak.
A tidal surge was expected to flood low-lying areas near Mackay as the storm whipped up waves and currents and lifted sea levels.
Authorities said it was too dangerous to venture outside and assess damage.
Emergency response crews were also hunkered down until the storm blew over.
It is going to take a long time, well into this afternoon and to the evening before these winds even start to die down," Queensland Premier Annastacia Palaszczuk told Australian Broadcasting Corporation television.
Holidaymakers tried to make the best of it as they bunkered down in resort buildings.
"Go to the Whitsundays they said, it'd be fun they said, beautiful weather over here ... if we had a kite," holidaymaker Kurt Moore told the Sydney Morning Herald.
Despite issuing evacuation orders, police told Reuters they were not sure how many people had heeded their advice.
Only about 400 people went to cyclone shelters as the winds gathered strength, making it more dangerous to venture outside.
That did not deter some thrill-seeking bodyboarders who paddled out to surf in the heaving seas at Airlie Beach, television footage showed.
Police blamed the wild weather associated with the storm for a traffic accident on Monday in which a 31-year-old female tourist was killed.