40 dead sea turtles appeared so far this year along the Uruguayan coast from Montevideo to Barra Del Chuy: Deaths blamed on fishing nets 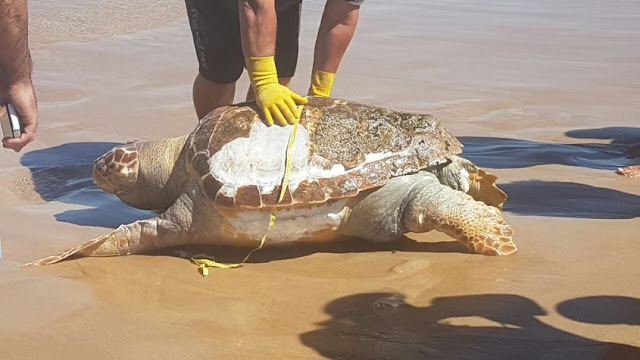 This weekend two more were found in Punta Colorada Since the beginning of the summer, more than 40 turtles have been found dead on the Uruguayan coast, from Montevideo to Barra Del Chuy. Five such cases occurred in the last two days, since the storms last Thursday. Those five were of the head turtle species, but also green turtles and seven keel’s turtles were identified.
"It's a cycle that repeats itself year after year," Estrades said.
According to the analysis carried out by the Karumbé staff, the cause of death of the turtles is drowning, caused by fishing activity. "The turtles are entangled in fishing nets and drown," Estrades explained to El Observador.
Karumbé, which has a team of 20 volunteers, arrives at the beaches when a tortoise dies and conducts a field study that consists of "releasing the specimen (date, time and place), determining the species, taking biometric measurements, taking Tissue samples, do an internal study to determine sex and corroborate whether or not she was sexually active.” Then the stomach is searched for plastics and water is seen in the lungs. "That allows us to identify the cause of death," said Estrades. Once all the samples are taken, the animal is buried in the sand.
Difficult solution
The director of the NGO was not very optimistic to be able to find a solution and, although it identifies the fishery as the main threat to the turtles, it emphasized the responsibility of the Uruguayan fishing boats.
The problem, he said, is that it is impossible to determine which type of fish is the one that most affects turtles because it is not easy to know for sure how long the animal was drifting prior to reaching the coast. That makes it difficult to identify the fishing boat that causes the turtle to die.


"It's a difficult issue to stop and to do that, we have to ban the fishery and that's something that obviously cannot be done," Estrades told El Observador.