The problem with Nurdles! Billions of tiny plastic balls being dumped in our oceans killing fish and sea birds! 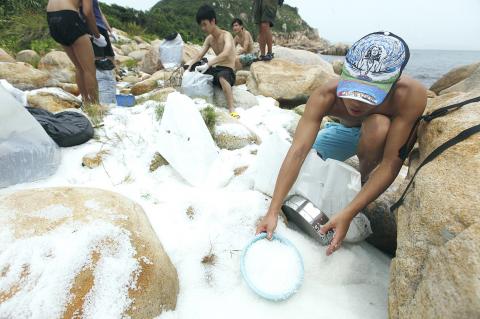 Photo Volunteers clean up plastic pellets on Hong Kong’s Lamma Island
It’s called a nurdle and it’s a tiny plastic ball which is used around the world to make plastic items, the nurdles are melted down to make almost all of our plastic products, such as phone covers, toy dolls, plastic bags and even spacecraft cables.

Nurdles are important building blocks of industry; however, for many companies around the Pacific Rim the only way to dispose these little plastic balls is to flush them into the sea. They are also thrown overboard from cargo ships, according to Sky News in 2012, 150 tonnes of nurdles leaked from shipping containers into the sea around Hong Kong.
Once these pellets are in sea they don't go away, the nurdles hit the water and become like a sponge, taking up pollutants from the surface water so they can be toxic too.
Sea birds, fish and other sea creatures are eating the plastic balls which give them a false sense of satiation leading them to starve to death. Birds like the puffin are said to be at particular risk.
The so-called "mermaid tears" swamped beaches and clogged up grass. Some of the pellets are found in the guts of fish and so locals became reluctant to eat seafood.
Closer to home, it is hoped the Great Nurdle Hunt will have helped campaigners to identify hotspots for nurdles around the UK.

Scotland, South Wales and Cornwall are already among the worst affected areas and FIDRA plans to share its research with the Government to raise awareness of the issue.
On Limekilns beach in Scotland around 1.2 million plastic pellets have washed up, according to new research at Strathclyde University.

Sky has launched its Ocean Rescue campaign to raise awareness of the damage being caused to our marine environment worldwide by single use plastics.