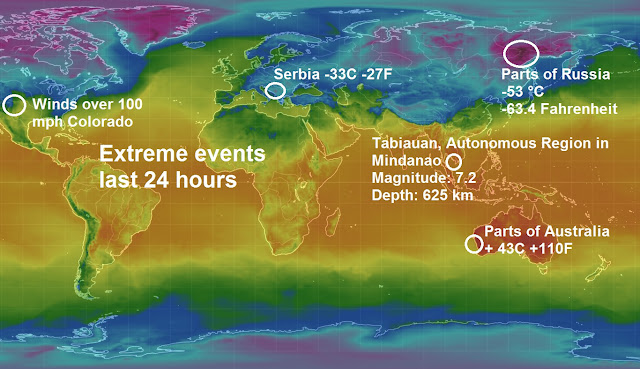 
Deadly cold is still gripping Europe with parts of Eastern Russia dropping an incredible minus 53C or minus 63F
The cold snap in Europe has cost the lives of nearly 50 people these past few days.
A Serbia resident has died of freezing and a man is still reported missing. Over 120 people evacuated across Serbia due to poor weather, media have reported. Snowed-in vehicles, chain collisions and massive snowdrifts marked the past few days in Serbia, with low temperatures, poor visibility and snowdrifts still creating problems and causing delays or traffic stoppages. Around 30 villages in the Sjenica area remained blocked by the snow, municipal president Hazbo Mujovic said on Monday afternoon. Many roads are also closed, he added.
The freezing cold weather will continue in Serbia until Wednesday, with morning temperatures ranging from minus 18 to minus 10 degrees Celsius, in some areas dropping to minus 25. Over the weekend, about ten mountain villages in the municipality of Vladicin Han were cut off due to snowdrifts up to three meters tall. Also on Sunday, the coldest area of Serbia was Sjenica in the southwest with minus 33 degrees. The Ministry of Transportation decided to close the rivers Sava as well as Danube (from Bezdan to Prahovo) for navigation due to the ice forming on the surface, and the strong winds
High winds wreaked havoc in Colorado Springs yesterday with wind gust reaching 101 miles per hour leaving thousands without power.
In Australia the West coast once again had temperatures of + 43C +110F