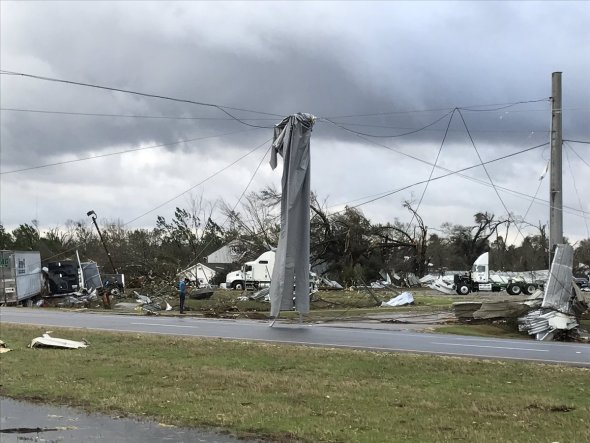 Tornadoes and severe weather has killed at least 18 people with more injured in the US South.
Georgia Governor Nathan Deal has declared a state of emergency in seven counties in the state, where 14 people have died.
Four people were killed by tornadoes in Mississippi on Saturday.
A "tornado risk" continued for Southern Florida, the National Weather Service said, as it warned of damaging winds and hail.
The Georgia Emergency Management Agency said in a news release that the 14 victims were in the southern Cook, Brooks, Dougherty and Berrien counties.
Most of the deaths occurred in Cook County, when a mobile home park was apparently struck by a tornado, reports the BBC.
As of 12:30 a.m. EST, Georgia Power reports over 10,000 customers remain without power, following the weekend's devastating storms.
Over 4,000 customers are affected by recent power outages across Florida, according to Duke Energy.
Alabama Power says as of 9:30 p.m., 6,500 customers are still in the dark.

SUMMARY...A broken band of strong storms continues moving slowly southeast across southern Florida. Isolated severe/tornado risk continues.
DISCUSSION...Latest radar loop reveals roughly 20 kt southeastward progression of the band of storms which now extends from Indian River County to Collier County, while individual cells (some of which continue to exhibit weak low-level rotation) move quickly northeastward.
Extrapolation of current line movement suggests that the band will clear the coast/keys by 10-11 Z. Until the line moves offshore, risk for locally damaging winds/hail and a tornado or two will continue, as the pre-frontal environment (per evening raobs and the latest VWPs) remains supportive of updraft organization/rotation. ..Goss.. 01/23/2017