Life-threatening and damaging waves of more than 10 meters high batter the Oregon coast this weekend! 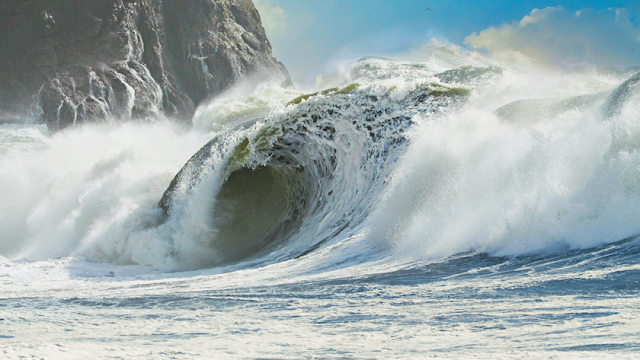 All over the Oregon coast on Saturday, a high surf advisory translated to life-threatening and damaging waves.
A woman was injured by a wave that hit her hotel balcony, and mammoth breakers destroyed a handful of condos in Rockaway Beach, among other reports.
According to the National Weather Service (NWS) in Portland, buoys out at sea documented 20-foot waves, living up the surf advisory issued by the NWS that is in effect until 10 p.m. Saturday.
They said actual breakers hitting the beaches could be much higher.
In a nearly unheard of incident on the Oregon coast, a woman was injured in Lincoln City by a wave when it hit the hotel balcony she was standing on.
It happened about 8 a.m. at the Surftides in Lincoln City resort, which sits above a sea wall that is almost ten feet from normal seasonal sand levels.

Jim Kusz, with the North Lincoln County Fire and Rescue Department, said the woman had what appeared to be minor injuries and was sent to the hospital, but knew little else about her condition. The balcony was nearly "demolished" he said, getting hit by what he estimated to be a ten-foot wave. Some witnesses reported the wave had come up over the balcony and smashed it that way, but Kusz said evidence pointed more to the structure actually being undercut by the wave.
Kusz urged the public to keep off the beaches and far back from areas where waves are hitting.
"Don't walk on beaches during these high surf advisories," Kusz said.
In Rockaway Beach, several condo units were destroyed by massive waves that came over the bluffs, even damaging cars in a parking lot.
Rockaway Beach resident Amanda Cairns said the condos called The Seascape Townhomes at NW 2nd and Miller Street took the brunt of a series of waves which went under the Rock Creek Inn and sailed over the pavement to the railroad tracks.
"The waves were really high this morning and this particular one busted the glass of the back deck of this beach front condo," Cairns said.
"It went through the lower level of the home and the water picked up everything in the garage and pushed it right through the garage door."
The marauding waves didn't end there, she added.
"There is construction going on at Rock Creek so the waves washed away all the building materials into the parking lot and washed a pile of construction lumber into the parked cars," Cairns said.
"It smashed the cars together as well."
There are reports from local residents about numerous sudden beach changes.
One path near the Catholic church in Rockaway Beach has been torn up and other photos show lots of wave-cut shelving of sand dunes.
A bench in front of the condos was demolished.
Way down south at Yachats, this part of the Oregon coast got plenty of tidal frights but no reported damage.
Resident Janette Square posted a striking video of waves reaching precariously close to her home. This is remarkable as there is about 40 feet between her backyard and the drop-off to the cliffs below, and those cliffs are 12 feet down below that.
Another image from the area shows some astoundingly unwise behavior at the Thor's Well area just south of town - a rocky shelf known for being exceptionally dangerous, and one that is high on the radar of officials right now because of the public's disregard for safety there.
Resident Pattie Huggins-Deitrick snapped this shot (above) of a man holding his camera getting walloped by a wave just after the sun went down.
Local residents have been documenting an extraordinary number of near-death incidences there, including Deitrick, and she said this was the closest she's ever come to seeing someone die right in front of her.
The man was knocked over on his back for a bit and lost his camera.
A Hawaiian tourist died there last month.
More large waves are set for tomorrow and Monday, although not quite as big.
No surf advisories have been issued for those days.