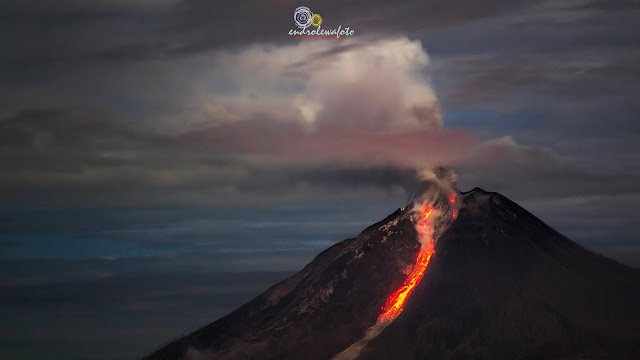 A volcano in western Indonesia was unleashing hot clouds of ash Tuesday, indicating that volcanic activity in the area remains high.
Seven people were killed when Mount Sinabung erupted last May.

CVGHM today reported explosive eruptions at Sinabung volcano.
The first of several Volcanic Ash Advisories (VAA) was issued by VAAC Darwin at 00:10 UTC. Ground observations estimated the maximum eruption plume height of the first eruption to be around 3000m above the summit area and the second eruption plume height to be around 2100m above the summit area, as confirmed by Himawari-8 satellite observations.
The plumes were tracked as dissipating in a southerly direction.
The image above was taken by Endro Lewa at around 01:34 a.m., who observed that the eruption occurred after an earthquake.
However, the monitoring officer for Sinabung volcano has stated to the media that these eruptions were not related to the magnitude 5.6 earthquake which occurred in Northern Sumatra, but rather the ground shaking remobilised ash deposits on the flanks of Sinabung coincidentally to the eruptions.