Much needed rain for California as seven inches of rain, almost two months worth fell over the last 24-hour's in the San Francisco Bay Area 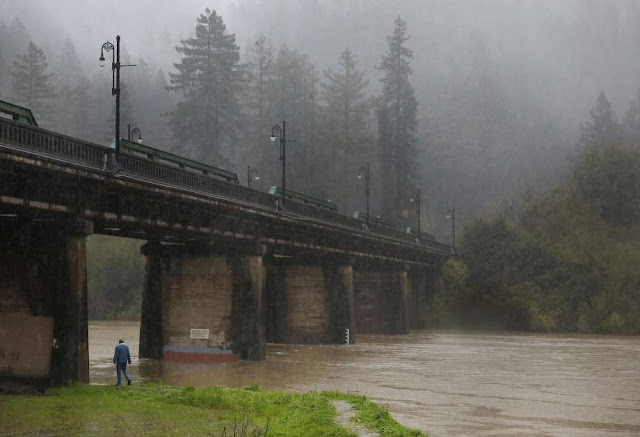 One of the strongest rainstorms of the season hit the San Francisco Bay Area this week, with a small town in the North Bay receiving nearly seven inches of rain, almost two months worth fell over the last 24-hour period, forecasters said.
Flash-flood warnings are in effect for southern Sonoma County and northern Marin County.
The remote town of Venado, west of Healdsburg, was hit the hardest as the storm moves from the North Bay into San Francisco and the Central Coast.
Some creeks in those counties are over flood stages, and other areas are poised to get a good soaking later Thursday.
"We are expecting some enhanced activity later Thursday in the Santa Cruz mountains and possibly the Santa Lucia mountains and Monterey County," National Weather Service hydrologist Mark Strudley said.
The storm could soak the region with as much as 2 inches of rain throughout Thursday in San Francisco and the East Bay.
Double that amount is expected in parts of the South and North Bay.
Strudley said that by mid-day Friday, the storm should have worked out its way out of the Bay Area and the Central Coast. California Highway Patrol Officer Andrew Barclay said drivers should take it slow to avoid driving through standing water and losing control.
"My biggest suggestion right now is slow down and have patience," Barclay said Thursday while in Marin.
"It's going to take longer than normal to get home tonight, don't rush."
In Healdsburg, antique dealer Greg Sheldon said driving conditions were difficult there.
"Some of our streets are flooded here.
I had two feet of water in one of my lanes," said Sheldon, who works at Antique Harvest.
"There's just tons of water coming off, the ground is so saturated right now.
Every field is a big lake."
Chris Daniels, who also works in Healdsburg and lives nearby in Windsor, said she is worried about getting home Thursday night.
"I have a creek behind my house.
It's just about ready to go over our road," she said.
"I'm just hoping I can get back into my house"
The storm is adding to an already soggy past few months.
Forecasters say San Francisco's 12 days of rain in October were the most in a single month in more than a century.
San Francisco received 2.43 inches of precipitation in October, which was more than double the total from a year earlier.
South of San Francisco in the city of Pacifica, leaders are set to raze a neglected apartment that is at risk of crumbling due to coastal erosion.
Over the weekend a massive sinkhole opened near the building following rains and king tides. Workers pumped sand and concrete into the hole, which closed access to a popular beach and caused concerns about recurring erosion due to heavy rains and high waves.
The National Weather Service issued a winter storm warning and flash-flood watch for Thursday through Friday for the Yosemite region.
Flooding will occur on the Merced River in Yosemite Valley.
Two to four inches of rain are forecast Thursday through Friday, with some areas receiving as much as six inches.
Roads will be closed in and out of the valley.