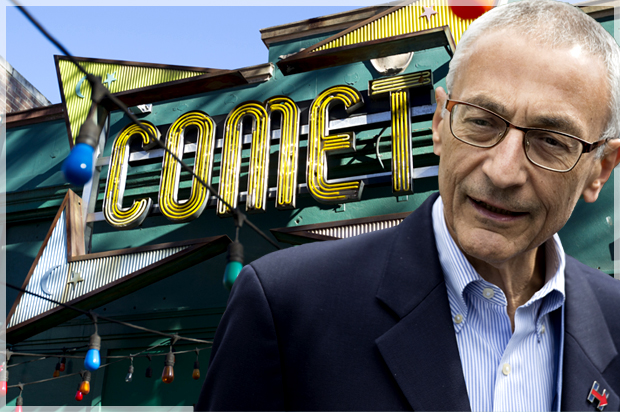 An ally of WikiLeaks founder Julian Assange has said the hack of the Democratic Party in the run up to the US elections was not Russia but instead an 'inside job'.

And he also delivered an unveiled quip about her ‘hanging around with some very weird and troubling people’ a remark aimed at connecting her with the #Pizzagate affair linking her, the Podesta brothers and Anthony Weiner to an alleged pedophile ring.

Former British ambassador Craig Murray said he has met the person who handed over the e-mails and they WERE from the Democratic National Committee (DNC).

The e-mails were released by Mr. Assange's site and caused damage to Hillary Clinton's reputation with a number of shock revelations among tens of thousands of e-mails.

In the Daily Express report today he said: “And it should be said again and again, that if Hillary Clinton had not connived with the DNC to fix the primary schedule to disadvantage Bernie, if she had not received advance notice of live debate questions to use against Bernie, if she had not accepted massive donations to the Clinton foundation and family members in return for foreign policy influence, if she had not failed to distance herself from some very weird and troubling people, then none of this would have happened.”

Pizzagate is a conspiracy theory which emerged during the 2016 United States presidential election cycle, alleging that John Podesta's emails, which were leaked by WikiLeaks, contain coded messages referring to human trafficking, and connecting a number of pizzerias in Washington D.C and members of the Democratic Party to a child-sex ring. The theory has been discredited by a wide array of sources across the political spectrum, described as a "fictitious conspiracy theory" by the District of Columbia Police Department and determined to be false by multiple left-wing media organizations including Snopes.com, The New York Times, BBC Washington Post and Fox News.
Origins
Reports of this conspiracy theory emerged during the 2016 United States presidential election cycle. The theory was started by Internet users reading John Podesta's emails released by WikiLeaks in early November 2016. Users speculated that some words in Podesta's emails were code words for pedophilia and human trafficking. The theory also proposed that the ring was a meeting ground for satanic ritual abuse. Other claims that the theory proposed include the use of handkerchief codes (interpreted from a widely-cited email with a "Pizza-related" handkerchief), the alleged use of pedophile symbols in the logos of various organizations, and John Podesta and his brother Tony Podesta's alleged connection to the disappearance of Madeleine McCann.

The theory was then posted on the message board, Godlike Productions, and the following day, Sean Adl-Tabatabai (a former associate of professional conspiracy theorist David Icke), repeated the story on Your Newswire, citing a 4chan post from earlier that year. Adl-Tabatabai's story was then spread by and elaborated on by other fake news websites, including SubjectPolitics, which falsely claimed the New York Police Department had raided Hillary Clinton's property. The website Conservative Daily Post ran a headline falsely stating that the Federal Bureau of Investigation (FBI) had "confirmed" this story.
Spread on social media
Around this time, Twitter and 4chan users started searching the leaked emails of John Podesta for food-related "code words" that supposedly revealed the existence of a sex trafficking operation. For example, The New York Times reported that the phrase "cheese pizza" was thought by a poster to 4chan to be a code word for child pornography since they had the same initials. The allegations spread to "the mainstream internet" following a post on the website Reddit several days before the United States presidential election, 2016. The post, since removed by the site, alleged the involvement of Washington, D.C. business Comet Ping Pong:

Everyone associated with the business is making semi-overt, semi-tongue-in-cheek, and semi-sarcastic inferences towards sex with minors. The artists that work for and with the business also generate nothing but cultish imagery of disembodiment, blood, beheadings, sex, and of course pizza.

The story was picked up by “so called” fake news websites such as Infowars.com, Planet Free Will and the Vigilant Citizen, and has been promoted by alt-right activists such as Mike Cernovich and Brittany Pettibone.

Redditors from /r/The Donald created the /r/pizzagate subreddit to further develop the conspiracy theory. This subreddit was banned on November 23, 2016 for violating Reddit's policy against doxing, as users had posted personal details of people connected to the alleged conspiracy.

A message displayed to users who attempted to access the subreddit read:

This subreddit was banned due to violation of our content policy. Specifically, the proliferation of personal and confidential information. We don't want witch-hunts on our site.

Funny that they call it fake news! Remember that Bill Clinton along with Hillary both have visited Orgy Island of Epstein...a convinced Pedophile. Even Prince Andrew of England was known to be a regular vistor to the Caribbean Pedophile Island. of course everyone knows that Anthony Weiner was good friends with the Clintons and Podesta Brothers. Hillary even introduced her lover....err...I mean staff member Huma Aberdine to her good friend Anthony. It also seems that Anthony and the Podesta brothers had some people that looked a lot like them when the little Magen disappeared in Portugal. There are police drawing of suspects that resemble Anthony and the Podestas that were reportedly seen in Portugal. ALOT OF SMOKE...and no fire?

Billy Once more a question about Donald Trump: You said that this man is well-meaning, not bad and in some things completely misinformed – what is to be understood by that?

Ptaah He is not of low intelligence and not the bad human being, that he will be accused of being by his adversaries, who will set upon him and also try to cause rebellion, because none of them know what insidious thoughts and plans his opponent Hillary Clinton really harbors, through which she would trigger a world-wide catastrophe if she came into power. And in order for this to happen, deceitful machinations will be initiated after the election, in order to prove allegedly false election results, by which Trump has illegally won his office. However, what will result of this planned deception, this we have not yet fathomed, which is why I cannot give any details to this. As far as the election campaign speeches by Trump are concerned, these are, first of all, just campaign speeches, which must not be understood as effective in their whole form, because the entire radically seeming ‘calling-out’ as you have often described such speeches, are only partially or not at all to be taken seriously, because as a rule these are always relativised after taking office. Additionally, Trump is in certain things that he advocates, wrongly informed, as for example in regard to climate change, as well as Obama-Care and other things, wherefore however there is the hope that he will think better of it in this regard. This will in fact be the case, therefore he listens to reason and will also refrain from non-earnestly meant campaign issues and will revise some wrong values, which correspond in his clumsy campaign speeches only to purposeful platitudes.
http://beam2eng.blogspot.fr/2016/11/excerpt-from-cr-663-regarding-2016-us.html