Scientists stumped! Unprecedented Arctic warmth in 2016 triggers massive decline in sea ice while Antarctic is gaining billions of tons of ice per year! 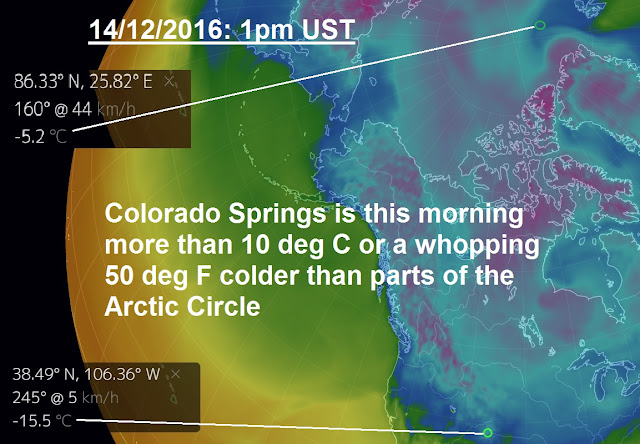 
If I was to claim on a random day in the Northern Hemisphere in the middle of December, Colorado Springs, more than 2,500 miles further south was more than 50 Deg F (10.3 Deg C) colder than parts of the Arctic Circle you would probably claim I was making it up, well as the chart above shows, I am not!

Parts of the Arctic Circle have often been much warmer than countries much further south in 2016, today is just another example. In November The Washington Post reported, ‘The North Pole is an insane 36 degrees warmer than normal as winter descends.’ Just last week The Big Wobble posted, ‘This morning at 9.am UST, Bismarck North Dakota USA recorded a temperature of minus 32.5C, minus 26.5F, which is 25F colder the North Pole which recorded its temperature at minus 17.3C, minus 1F.’

So it should not come as a surprise at NOAA’s latest report: Unprecedented Arctic warmth in 2016 triggers massive decline in sea ice, snow.

Here are the main points of the report.

“Rarely have we seen the Arctic show a clearer, stronger or more pronounced signal of persistent warming and its cascading effects on the environment than this year,” said Jeremy Mathis, director of NOAA’s Arctic Research Program. “While the science is becoming clearer, we need to improve and extend sustained observations of the Arctic that can inform sound decisions on environmental health and food security as well as emerging opportunities for commerce.”
Major findings in this year’s report include:

Warmer air temperature: Average annual air temperature over land areas was the highest in the observational record, representing a 6.3 degree Fahrenheit (3.5 degree Celsius) increase since 1900. Arctic temperatures continue to increase at double the rate of the global temperature increase.

Record low sea ice: The Arctic sea ice minimum extent from mid-October 2016 to late November 2016 was the lowest since the satellite record began in 1979 and 28 percent less than the average for 1981-2010 in October. Arctic ice is thinning, with multi-year ice now comprising 22 percent of the ice cover as compared to 78 percent for the more fragile first-year ice. By comparison, multi-year ice made up 45 percent of ice cover in 1985.

Above-average Arctic Ocean temperature: Sea surface temperature in August 2016 was 9 degrees Fahrenheit (5 degrees Celsius) above the average for 1982-2010 in the Barents and Chukchi seas and off the east and west coasts of Greenland.

Arctic Ocean productivity: Springtime melting and retreating sea ice allowed for more sunlight to reach the upper layers of the ocean, stimulating widespread blooms of algae and other tiny marine plants which form the base of the marine food chain, another sign of the rapid changes occurring in a warming Arctic.

This year’s report also includes scientific essays on carbon dioxide in the Arctic Ocean, on land and in the atmosphere, and changes among small mammals.

Ocean acidification: More than other oceanic areas, the Arctic Ocean is more vulnerable to ocean acidification, a process driven by the ocean’s uptake of increased human-caused carbon dioxide emissions. Ocean acidification is expected to intensify in the Arctic, adding new stress to marine fisheries, particularly those that need calcium carbonate to build shells. This change affects Arctic communities that depend on fish for food security, livelihoods and culture.

Carbon cycle changing: Overall, the warming tundra is now releasing more carbon into the atmosphere than it is taking up. Twice as much organic carbon is locked in the northern permafrost as is currently in the Earth’s atmosphere. If the permafrost melts and releases that carbon, it could have profound effects on weather and climate in the Arctic and the rest of the Earth.

Small mammals: Recent shifts in the population of small mammals, such as shrews, may be the signs of broader consequences of environmental change full report here